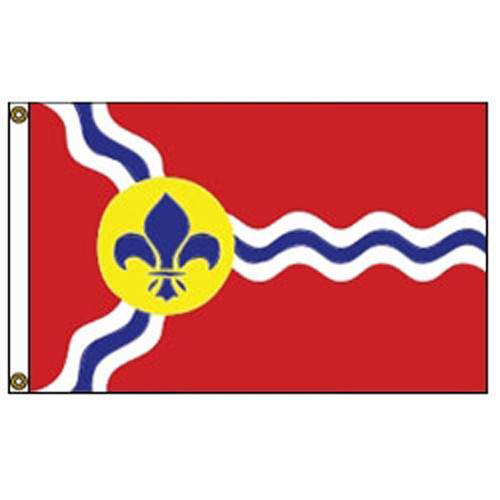 The St. Louis flag symbolically epitomizes the city's location and its role as the gateway to the West. Set on a red background, the St. Louis flag displays the confluence, or joining, of the Mississippi and Missouri Rivers with three intersecting blue lines. The point of intersection is denoted by a large fleur-de-lis, a noble symbol which denotes St. Louis' rich French heritage. The flag recalls the colors of Spain (red and gold), France, (blue, white and red), and the U.S. (red, white and blue). The St. Louis city flag was designed by Yale professor Theodore Sizer. For more information about St. Louis City flags see the description tab below.

St. Louis was founded in 1764 by Pierre Laclede and his stepson Auguste Chouteau. The city was named after Louis IX of France. St. Louis is often identified with by its 630 ft. Gateway Arch in downtown St. Louis and is also known as the “Home of the Blues." St. Louis is the cultural center of the Missouri. Our St. Louis City Flags are the best all-around flags available. Fashioned with intricately crafted materials, St. Louis flags are constructed with strong, durable nylon that waves effortlessly in the wind. The St. Louis flag features beautiful bright colors and exquisite lock stitching. Our St. Louis city flags are available in five sizes ranging from 2'x3' to 6'x10'. Show your St. Louis pride with a flag that honors the St. Louis Rams, with one of our custom NFL team flags. Perhaps an NCAA college sports flag honoring one of St. Louis' university suits you or a Missouri State Flags. Choose from our assortment of flagpoles to complete the look you desire.