The Flag of Guam majestically portrays its people’s faithful commitment to passing their heritage, culture and language to an endless sea of future generations. Located in the Pacific Ocean east of the Philippines, Guam is home to the Chamorro, a resilient people who have survived famine, natural disasters, wars and genocide. The word Guam means “we have”. The Guam flag displays the territory’s coat of arms in a blue field which signifies the people’s connection with the sea. The shape of the seal is that of a Chamorro sling stone used for warfare and hunting. The scene within the Guam Seal depicts the aftermath of a disastrous typhoon which destroyed the island’s naval yard leaving only a single coconut tree in its aftermath. The bent tree, growing in unfertile sand, symbolizes self-sustenance and the determination of the Chamorro to survive under any circumstances. The proa, or canoe, reflects the skill of the Charmoru. The red border of the seal pays tribute the blood shed during World War II and the Spanish occupation. 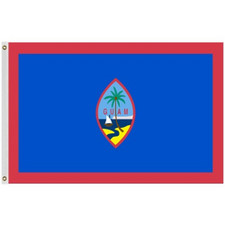 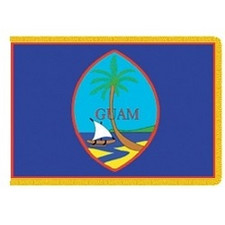