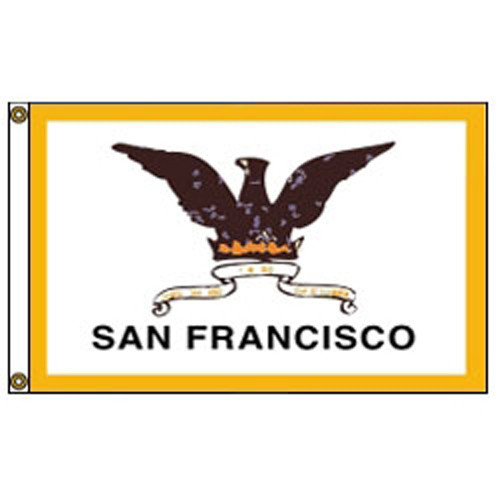 San Francisco is the cultural, financial and commercial center of northern California. The city is named for St. Francis of Assisi, founder of the Franciscan Order. Much of San Francisco's early growth may be attributed to the gold rush in the late 1840s. Welcomed by the Golden Gate Bridge, the “City by the Bay" still attracts fortune-seekers, immigrants, artists and poets. San Francisco is the only consolidated city-county in California. San Francisco flags are constructed with lightweight but durable nylon, vibrant colors and exquisite lock stitching. Carrot-Top's San Francisco flags dry quickly and fly effortlessly in the slightest breeze. San Francisco City flags are available in five sizes ranging from 2'x3' to 6'x10'. Match your San Francisco flag with a California State flag or one of our many American Flags. Carrot Top will also provide you with the flag of the San Francisco 49ers, San Francisco's beloved professional football team. All Carrot Top flags feature a canvas header and two solid brass grommets for easy attachment to your flag pole. Choose from our assortment of flagpoles to create a classic look that honors the City of San Francisco.