The Florida State flag reflects its status as the land of sunshine, flowers, palm trees and rivers. The Florida flag features a red saltire, or diagonal cross, on a white field with the state seal superimposed at the center. Florida’s previous state flag included only the state seal on a white background. Florida’s governor added the saltire to the state flag in the 1890’s in an effort to avoid confusion with the white flag of surrender. The Florida State seal at the center of the saltire highlights the state’s natural treasures, industry and peoples. A brilliant sun rays shines over a high land in the distance as a steamboat sails on a river and a Native American Seminole woman scatters flowers. The Florida seal also features a sabal palmetto palm, the state tree of Florida. The seal is encircled by the words “Great Seal of the State of Florida: In God We Trust”. 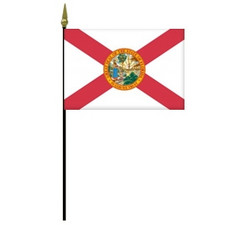 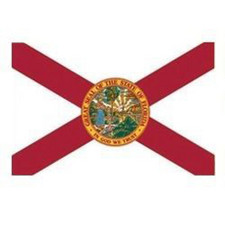 Background on the Florida Flag

Since the early 16th century, when European explorers first found and arrived in this region, Florida has experienced an influx of several state flags. Spain, France, Great Britain, the United States, and the Confederate States of America were among the most well-known nations to tour. When Juan Ponce de León assumed control of Florida on April 2, 1513, Spanish rule in the state officially began.

Spanish dominion over Florida was transferred to Great Britain by the Treaty of Paris in 1763. The British used the original union flag during this time, which had white diagonal stripes. Florida was split into East Florida and West Florida at this time, with St. Augustine and Pensacola serving as their respective capitals.

William D. Moseley, the first governor of this state, came up with the idea and created the first interim flag. Five horizontal stripes of blue, gold, red, white, and green made up the flag. The flag also has the words "Let Us Alone" written on a ribbon.

Provincial flags in Florida were given the Confederacy's tri-band pattern by Governor Perry. The state seal was centered within the field, but the flag's blue background extended downward. The Confederacy and the Bonnie Blue flag each had three iterations that were abandoned. From the Confederate flag, a white flag bearing the state was selected. Florida governor Francis P. Fleming added the red saltire of St. Augustine to the state flag of Florida to prevent it from seeming to be a truce flag. It was also thought of adding the blue Andrew's cross.

Florida's state flag's current design was chosen in 1900. In that year, Florida voters approved a constitutional amendment that added diagonal red bars to the flag in the shape of a St. Andrew's cross. This amendment was based on a joint resolution of the state legislature from 1899.

Florida's official flag from 1868 to 1900 featured a white field with the state seal in the middle. Governor Francis P. Fleming proposed adding a red cross in the late 1890s to prevent the flag from seeming like a white flag of truce or surrender when it was hung still from a flagpole.

The dimensions were eliminated and replaced with statutory wording when the Constitution was revised in 1968. These are the words used to describe the flag: "The state seal, with a diameter of half the hoist, is located in the middle of a white background. From each corner toward the center and out to the outside rim of the seal are red bars that are one fifth the width of the hoist."

Fun Facts About the Florida Flag

Florida's flag is ranked number 34 in terms of design excellence out of 72 Canadian province flags, US state flags, and US territories flags by the North American Vexillological Association (NAVA).

The state anthem serves as a window into the past. Florida's flag, with its Native American Seminole woman and palm trees, symbolizes the state's values and character, but more significantly, the values of the people who lived there at the time it was approved. Let Us Alone, which featured on the first interim flag presented by William D. Moseley for the flag of Florida, was the first recognized motto of the Florida territory.

For a very long time, Florida, like many other states, lacked a designated state motto. In God We Trust was the state's motto when Florida created a new constitution following the American Civil War. After the Civil War, Florida's state motto finally gained recognition. One of the three states—the others being Georgia and Mississippi—that has incorporated the US national motto onto its state flag is Florida.

Carrot-Top is proud to carry Florida state flags that are Made in America! Supporting American jobs and the economy by purchasing goods created in the country is crucial. Even better, purchasing from domestic businesses ensures that your items are produced in accordance with American labor laws and manufacturing standards.

Support Made in the USA products today by purchasing your state of Florida flag from Carrot-Top Industries. We are also proud to offer American flags that are made in the USA!

Why do Alabama and Florida have the same flag?

Why does the Florida flag have a red cross?

What does the Florida flag represent?

Get Your Florida Flags from Carrot-Top Today!

Carrot-Top has a great selection of various state of Florida flags! We offer indoor, outdoor, and flag sets, so you can be sure to find what you need!

Our indoor Florida flags are available in both nylon and polyester material. These lovely flags have wonderful reinforced stitching, vivid, bold, fade-resistant colors, and are constructed from the finest materials.

Our outdoor Florida flags allow you to proudly express your affection for the state of Florida. Outdoor Florida flags come in a variety of sizes and two distinct fabrics. Outdoor FL flags by Carrot Top are produced in both nylon and polyester. These stunning flags have great reinforced stitching, vivid, bold, fade-resistant colors, and are produced from the finest materials. These flags are made in the USA with pride.

Our Florida flag sets provide you the choice to create the style that is most appropriate for your home or location. Our flag sets offer a variety of flags, flagpoles, and (pole) finishes so you can add to your current aesthetic or adopt a completely new one. To construct the ideal indoor/parade Florida State flag set display, make your selection.

H2: Let Our Team of Experts Help You Today!

Our Carrot-Top Customer Care Team is eager to assist you with your order today. Contact Us Today.