The Nebraska State flag symbolizes the state’s growing prosperity and bright future. The Nebraska flag consists of a field of blue centered with the Nebraska state seal. The Nebraska seal pictures a blacksmith hammering on an anvil, a settler’s cabin surrounded by sheaths of wheat and corn, and a steamboat on the Missouri River. A train heading toward the Rocky Mountains denotes the transcontinental railway. These items represent Nebraska’s strong industry, rich agriculture and its pathway to the future. The seal also includes the Nebraska state motto, which translated reads “Equality before the law”. Originally, this saying referred to each settler’s right to public land and later supported the abolition of slavery. 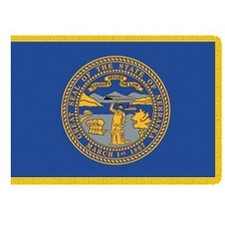