The Indiana State flag not only commemorates Indiana’s entrance into the union as the 19th state but it also epitomizes the “Hoosier state’s” strong ideology and commitment to liberty. Designed by Paul Hadley for a contest given by the Daughters of the American Revolution, the Indiana flag features a blue background with the gold torch of enlightenment at its center. 19 gold stars surround the torch. 13 stars in the outer circle honor the original 13 colonies while the five stars of the inner semicircle represent states which joined the Union prior to Indiana. Indiana is represented by the largest star. The rays emitting from the torch illustrate Indiana’s far reaching influence. The Indiana state flag was adopted in 1916. 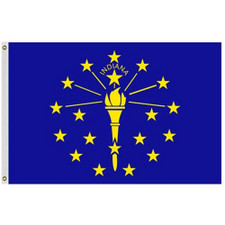 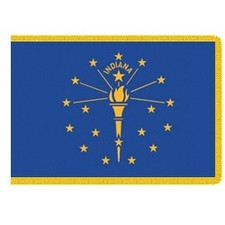 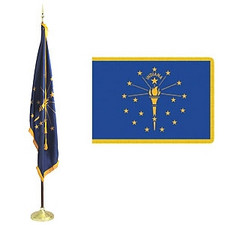 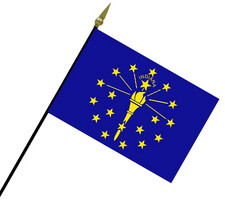 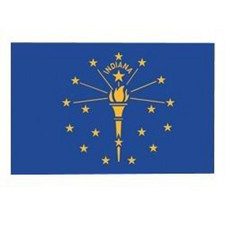 Full History of the Indiana Flag

In order to establish a state flag, the Indiana General Assembly passed a resolution in 1916, the year the state celebrated its 100th birthday. The Indiana Society of the Daughters of the American Revolution organized a competition to choose a flag to represent the state at the General Assembly's request. The contest provided the winner with a $100 cash reward as an inducement to submit further entries. Before choosing a winner, the Society received and reviewed more than 200 submissions. Paul Hadley of Mooresville, Indiana's submission was ultimately selected as the competition's winning entry and recipient of the $1,000 award.

The flag was selected as the state's official symbol on May 31, 1917. Hadley's initial design was only slightly altered by the General Assembly, who placed the word Indiana above the flame in the shape of a crescent. In a new statute established in 1955 that also regulated the flag's size, the state banner was eventually dubbed the state flag.

In 2016, the Indiana Bicentennial Torch Relay used Indiana state flag emblems like the torch in a starry circle.

Statutes that Govern the State Flag

The state flag's proportions must be three feet fly by two feet hoist, five feet fly by three feet hoist, or any size equivalent to either of those measurements, according to the statute that now controls their design. The flag will have a blue background with 19 stars and a burning torches in either gold or buff. Five stars should be arranged in a half circle below the torch and inside the outer circle of stars, representing the states admitted before Indiana, and the nineteenth star, noticeably larger than the others and representing Indiana, should be placed above the flame of the torch. The outer circle of stars should consist of thirteen stars, each representing one of the original thirteen states. The outer circle of stars should be set up so that one star is directly in the center at the top of the circle, and the word "Indiana" should be positioned in a half circle over and above the star that represents Indiana and in the middle of the circle, halfway between it and the star in the center above it. Rays from the torch will be seen illuminating the three stars on either side of the upper-center star of the circle.

The outer circle of stars should be set up so that one star is directly in the center at the top of the circle, and the word "Indiana" should be positioned in a half circle over and above the star that represents Indiana and in the middle of the circle, halfway between it and the star in the center above it. Rays from the torch will be seen illuminating the three stars on either side of the upper-center star of the circle.

The Indiana Pacers' team colors, gold and blue, were most obviously inspired by the flag.

The torch and stars of the flag were a part of Bloomington-licensed CW affiliate WTTV's station emblem from late 2008 until 2015, when they switched to being a CBS affiliate, while the logo is still used for their second digital subchannel.

The Gotham flag in the 1989 film Batman was an adaptation of the Indiana state flag. The mayor's office displays the flag.

In order to preserve trademark protection, the torch-shaped logo of the BP-acquired Amoco Corporation (formerly Standard Oil of Indiana) is still used at the few BP stations that still sport the Amoco and Standard trade dress.

FAQ About the Indiana Flag

What do the colors mean on the Indiana flag?

What do the symbols on the Indiana flag mean?

What is Indiana's motto?

What is Indiana famous for?

Our Outdoor Indiana Flags are made to withstand the rigors and hazards of your particular location and setting. Outdoor Indiana flags are produced with the best materials, come in Beacon® nylon and Patriarch® polyester, and have vibrant, vivid, and fade-resistant colors. Each fabric for these flags comes in a range of sizes.

The Indiana Flag Sets are a fantastic way to display your love for the state. With the help of our flag sets, you can create a display that perfectly fits your requirements and available space. Two indoor flags, as well as a range of flagpole and (pole) finish options, are available from Carrot Top. Create your own aesthetic or go with a classic appearance. You have the choice to create your own style or complement your existing decor with these Indiana flag sets. The majority of flags and most areas are ideal for our 5'-9' unique Majestic Telescopic Pole, a Carrot Top exclusive. Three pieces of this adjustable pole can be raised or lowered with a few easy twists.

Our Indiana State Flags are Made in the USA

Our Indiana state flags are all proudly made in the USA with the highest quality and standards of craftsmanship. These flags are something you can be proud to put on display, wherever you are!

Pair your Indiana state fag with an American flag, also proudly made in America.

Let us Help You Today!

Over 40 years of expertise and experience in the flag industry can be found at Carrot-Top Industries. Please know that we are eager to assist you when you are ready to place an order. You can contact our team or place an online order today!