Carrot-Top Industries is proud to be backed by over 40 years of experience and expertise in the flag industry! These Missouri flags are backed by the Industry’s Best Six-Month Guarantee against any defects, fading, or tearing, starting at your date of purchase.

The Missouri State Flag proudly and honorably celebrates the strength, power, and potential of the "Show Me State." At Carrot-Top, we are honored to preserve these principles represented by the Missouri flag. Check out more of our Missouri flags below! 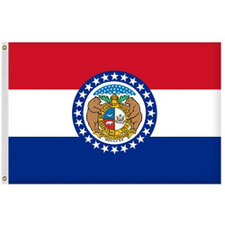 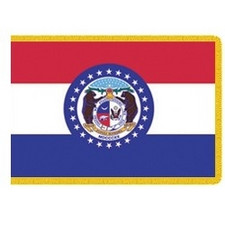 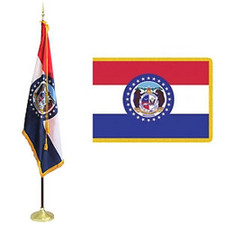 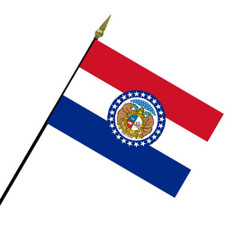 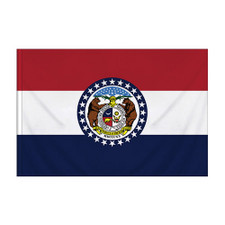 History of the Missouri Flag

After becoming a state, Missouri went over a century without having a state flag. The Daughters of the American Revolution established a committee to investigate creating a state flag in 1908, which is when the concept for a flag first emerged. Mrs. Marie Elizabeth Oliver, a Cape Girardeau resident and the wife of senator Robert Burett Oliver, served as the committee's chair. The flag was ultimately created by Mrs. Oliver, and on March 17, 1909, the Missouri Senate was presented with a measure endorsing the design.

It turned out that the General Assembly was not just considering Mrs. Oliver's design; Dr. N.R. Holcomb had also proposed a different concept. Many people hated the "Holcomb flag" because they thought it was too similar to the American flag and didn't represent Missouri very well. He omitted the coat of arms and any other elements that would have suggested state sovereignty from his design.

The design by Mrs. Oliver was creative and, despite its straightforward layout, it conveyed a lot of messages. The "Oliver flag" measure wasn't finally passed for three years and multiple tries. Governor Elliot Major signed the legislation into law on March 22, 1913, designating the Oliver flag as Missouri's official state flag.

Allen Oliver donated his mother's original flag to the state of Missouri in 1961. It was displayed to the public until the age-related splitting and tearing of the flag caused it to be stored in a vault. Secretary of State Roy Blunt tasked Missouri elementary students with helping to gather money to restore the flag in 1988, the year it celebrated its 75th birthday. The flag has been restored and is now on display at the James C. Kirkpatrick State Information Center in Jefferson City as a result of the efforts of these youngsters.

Before Major-General Sterling Price, commander of the Missouri State Guard, issued the following directive on June 5, 1861: "Either regiment will adopt the State flag, fashioned of blue merino, 6 by 5 feet, with the Missouri coat-of-arms in gold gilt on each side," Missouri was without an official flag. Since then and the efforts of the Daughters of the American Revolution’s effort, the current Missouri flag has been in effect.

The Missouri state arms are located in the middle of three equal horizontal tribands of red, white, and blue stripes. The red and white stripes, which were created by Mary Elizabeth Oliver, traditionally stand for bravery and purity, respectively. Three things are symbolized by the color blue: the state's permanence, constancy, and fairness. The three colors also draw attention to the early French influence on the state. A blue ring with 24 stars surrounds the Missouri state seal, which is located in the center of the white stripe and represents the state's entrance as the 24th US state. The state seal, "Salus Populi Suprema Lex Esto," which translates to "The health of the people should be the supreme law," is also depicted on the flag.

The Missouri state flag resembles that of the Netherlands.

The 72 state, territorial, and provincial flags of the United States and Canada were the subject of a 2001 survey conducted by the North American Vexillological Association. The Missouri flag placed 48th out of 72, in the bottom quarter.

FAQ About the State of Missouri

What is Missouri well known for?

The agriculture and livestock industries are well-known in Missouri. The state has some of the most fertile farmland in the nation, which contributes to its status as one of the top agricultural producers in the country. Mark Twain was born in Missouri, and the history of riverboats in the state is honored in a number of ways, notably at the St. Louis Riverfront. Missouri is renowned for its mouthwatering barbecue and propensity for tornadoes.

The majority of the lead that is mined in the United States is utilized in vehicle batteries, with Missouri being the biggest producer. Additionally, the state produces the most lime in the country. (Among other things, lime is a mineral needed in the production of steel.)

Why is Missouri called the “Show Me State?”

Pit bosses started speaking, "He's from Missouri, by the way. You'll have show to him." Whatever its original meaning, the phrase has subsequently taken on a completely new meaning and is now used to describe the staunch, traditional, and unyielding nature of Missourians.

What is Missouri named after?

The Missouri tribe of Native Americans inspired the name Missouri. It derives from the word ouemessourita, which means "those who have dugout boats" or "wooden canoe people" in English.

The Types of Missouri Flags That We Offer

We are pleased to offer high-quality outdoor and indoor Missouri flags, as well as Missouri Flag Sets. This way you can be sure to get a flag for exactly what you have in mind!

The lightweight, elaborately woven, extra-tough nylon used to make indoor Missouri flags wave elegantly in the slightest breeze. The most useful flags on the market are Carrot Top's Indoor flags, made of Beacon® Nylon. These flags have vibrant, fade-resistant colors and elegantly strengthened lock stitching to avoid fraying. There are two sizes of indoor Missouri flags: 3' x 5' and 4' x 6'. The left side of Beacon® Nylon Missouri flags is finished with a lined pole sleeve, while the other three sides are trimmed with traditional, velvety gold fringe. Both the 3' x 5' and the 4' x 6' Missouri flags fly beautifully on our unique Majestic Telescopic Pole®. While the 4'x6' flag displays best with a 9' indoor/parade pole, the 3'x5' flag is equally perfect with an 8' indoor/parade flagpole.

With beauty and distinction, you may display your love for the state of Missouri by flying an outdoor Missouri flag. These flags have the finest level of craftsmanship and are both adaptable and practical. Outdoor flags come in a range of sizes and are created in both Patriarch® Polyester and Beacon® Nylon. Our Missouri outdoor flags are the most durable and all-weather flags on the market. Our Beacon® Nylon Missouri flag is constructed from incredibly durable, lightweight nylon that flies with ease in even the smallest wind. Flags made by Beacon® are designed for use in areas with strong winds. Beacon® flags come in the following sizes: 12" x 18", 2'x3, 3'x5, 4'x6, 5'x8, 6'x10", and 8'x12. The extremely durable, woven polyester used to create Patriarch® Polyester Missouri flags has the appearance and feel of cotton. These flags are made for coastal and strong wind areas and come in the following sizes: 3'x5', 4'x6', and 5'x8'. Both the Patriarch® and Beacon® flags are completed with two solid brass grommets for quick connection to your flagpole and a sturdy canvas header along the left side.

In your house, workplace, church, or other location, Missouri Flag Sets offer traditional displays of the lovely Missouri flag. By giving you an option between two flags, two flagpoles, and three (pole) finishes, Carrot Top puts you in control. Adapt your flag display to the style of your current decor or go completely in another direction. You can select the flag, flagpole, and (pole) finishes for Missouri Flag Sets. These flag sets provide you with the freedom to create the appearance that best suits your sense of fashion and your display area. Our most versatile flagpole is the 5-9' Majestic® Telescopic Pole, a Carrot Top exclusive. The Majestic® is simple to put together and move about. This adjustable flagpole is offered in three finishes: Gold, Chrome, and Wood Grained, and it shows most flag sizes admirably, including our 4' x 6' and 3' x 5' Missouri flags. The 2-piece, genuine oak hardwood Jointed Oak finished Flagpole has a more classic appearance and elegance. The 3'x5' Missouri flag looks best when flown from an 8' Jointed Oak pole, while the 4'x6' Missouri banner looks best when flown from a 9' Jointed Oak pole. The pole diameter of the Jointed Oak and Majestic Poles each tapers from 1 14" at the bottom to 7/8" at the top. Any ornament may be used without an adapter thanks to this. All Carrot Top flag sets come with a decorative spear, a gold rope with tassel, and a gold base that is weighted.

Our Missouri Flag Flags are Made in the U.S.A

Our American and Missouri flags are just two examples of the Made in America goods we proudly sell at Carrot-Top Industries. Our flags are among the best created, and American goods are excellent investments.

Here at Carrot-Top Industries, we are extremely proud of our more than 40 years of grit and experience. We utilize our extensive knowledge to ensure customers like you are getting the best, most accurate information available. Any of our customer service representatives would be delighted to assist you in placing an order right now for a Missouri state flag, a Made in America American flag, a flagpole, any of our customized merchandise, or even one of our military flags! Our state flag guide will answer many questions about the buying process. Alternatively, please contact us using our contact us form.