The "Beaver State's" history and beliefs are honorably reflected in the Oregon State flag. For a wide range of uses, Carrot-Top provides a fantastic collection of Oregon flags. We have more than 40 years of experience in the flag business. Let us help you today get the ideal Oregon flag for your requirements! Please feel free to peruse the comprehensive information on the history and significance of the Oregon Flag that is provided beneath the products. 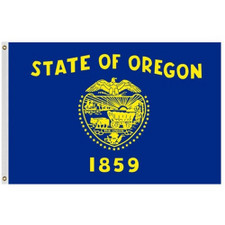 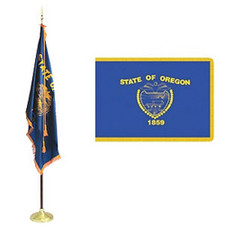 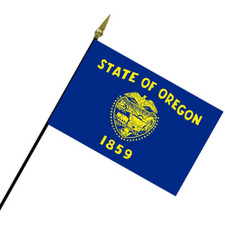 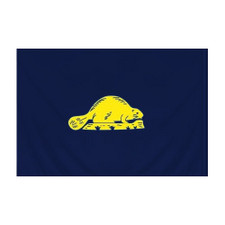 History of the Oregon Flag

On February 26, 1925, Oregon's present flag was formally adopted. That year, Meier & Frank created what is thought to be the first flag of Oregon, which was sewed by Marjorie Kennedy and Blanche Cox, two of the department store's employees. The grandson of former governor Walter M. Pierce gave that flag to Eastern Oregon University in 1954. The flag was restored in 2010.

The Oregonian organized a statewide competition to redesign the state flag in 2009 for the Oregon Sesquicentennial. The winning entry was chosen by public vote after the newspaper collected and published the entries. Randall Gray, a map creator for Clackamas County, came up with the winning concept. Gray accentuated the beaver on the existing flag's back in his design. While the green reflects Oregon's natural wildness and forests, the star symbolizes Oregon's position within the Union. After voting had begun, there were pleas for the Oregonian to add a further option, "NONE OF THE ABOVE," which would have kept the present state flag in place. "NONE" received the most votes in the final total of votes.

A bill that would have made numerous changes to the flag's design was introduced to the Oregon Senate in 2013, but it never made it out of committee. State Senator Laurie Monnes Anderson supported this bill on behalf of Matt Norquist, a citizen of Gresham, who advocated for changing the flags.

The suggested design is described as follows in the bill:

The flag field is navy blue, while the state colors of Oregon are represented by all lettering and insignia being in gold. The escutcheon, which is also seen in the Oregon state seal, is surrounded by the legend STATE OF OREGON on the reverse. 33 stars surround the shield, signifying Oregon's 33rd state admittance to the Union. 1859, the year Oregon became a state, is written beneath the shield.

The flag of Oregon is the final state flag in the United States with a different design on the obverse and reverse sides. The only nation that still uses a two-sided flag is Paraguay. Due to the higher costs of producing a flag with two distinct designs, two-sided flags have become less prevalent than they once were. The Oregon state animal, the beaver, is depicted on the reverse of the flag, also in gold.

A gold fringe may be present on the flag for dress or parade purposes. There is no need for fringe for typical use. The flag's width to length ratio is 3 to 5.

Interesting Facts About the Oregon Flag

FAQ About the State of Oregon

1. What is the state of Oregon known for?

Amazing natural wonders like Crater Lake, Mount Hood, and Cannon Beach are among Oregon's most well-known attractions. Additionally, it is the location of Nike, Portland, and countless llamas. There are numerous indigenous tribes residing in Oregon.

2. How does Oregon rank in education?

3. When did Oregon become a state?

The 49th parallel became the official boundary between U.S. and British territory in 1846; the portion of the territory that was handed to Britain would later become a part of Canada. On February 14th, 1859, Oregon was admitted to the union as a state.

Our Oregon Flags are Made in the USA

We at Carrot-Top Industries are extremely proud to sell products like our American and Oregon flags that are Made in the USA. By purchasing products that are Made in the USA, you can directly contribute to the American economy and independence. It is no surprise that Americans like purchasing goods that are labeled "Made in America" given the superior quality and labor standards that have been established.

What Oregon State Flags do we Offer?

We are proud to offer a variety of outdoor, indoor, mini, and flag sets so you can show off your pride in the “Beaver” state!

The best materials are used to create our outdoor Oregon flags, which also feature excellent craftsmanship. These flags are made of two of our premium house brands, Beacon® Nylon and Patriarch® Polyester, which are both backed by our Industry’s Best Six-Month Guarantee against any defects, fading or tearing, starting at your date of purchase. Each brand has been specifically designed to satisfy the demands of your unique surroundings.

The best flag and flagpoles are included in our Oregon Flag Sets. One of the most adaptable flagpoles available is our unique 5-'9' Majestic® telescoping Pole. In addition to being adjustable, this pole is also simple to pack and put together. Both the 3 x 5' and the 4 x 6' Oregon flags fit and exhibit well on Majestic Poles, which also offer three other pole finishes: gold, chrome, and wood-grained. There are two sizes of the Jointed Oak finished flagpole, which is another choice. The 3'x5' Oregon flag can be flown in locations with at least an 8.5' ceiling clearance using the 8' Jointed Oak Finished pole. The 4'x6' Oregon flag works best with the 9' Jointed Oak finishing pole in areas with at least 9.5' ceiling clearance. The pole diameter of both the Majestic® and the Jointed Oak Pole tapers from 1 14" at the bottom to 7/8" at the top. Sets of the Oregon flag include a weighted base, a decorative eagle or spear, and a gold string with tassel.

We at Carrot-Top are extremely proud of our more than 40 years of grit and experience. Any of our customer service representatives would be delighted to assist you in placing an order right now for an American flag, a flagpole, an Oregon state flag, any of our bespoke products, or even one of our military flags! Contact us immediately! Please read through our comprehensive flag buying guide as well to make sure you are getting the right flag for your needs.