The Hawaii State flag honors “the Aloha State’s” unique relationship with the United States and Great Britain. Hawaii is the only U.S. state flag to feature the Union Jack, the flag of the United Kingdom. The Hawaii flag was commissioned in 1816 at the request of the first king to unite the eight major Hawaiian Islands. Stories speculate that the flag was meant as a symbol to appease both British and American interests during the War of 1812 (which pitted the United States against Great Britain). The Hawaii flag consists of eight stripes of white, red and blue with each stripe representing a major island. The red stripes are said to symbolize Hawaii’s god, the white stripes represent truth and the blue stripes signify the ocean. The Union Jack rests in the upper left corner. Hawaii was the 50th state admitted to the union on August 21, 1959. 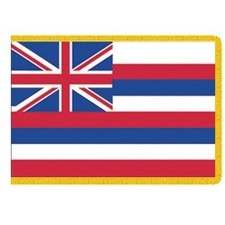 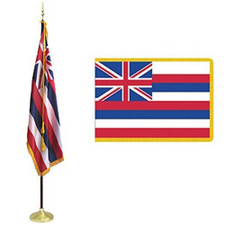 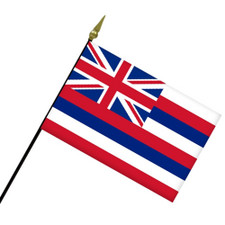 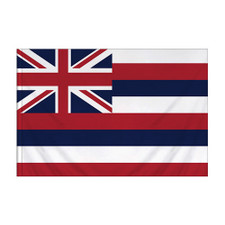 Background of the Hawaii State Flag

The Kingdom of Hawaii was the original owner of the Hawaiian flag. Following the collapse of the monarchy, the flag first represented the Hawaiian Territory and later the Republic. In the end, it stood in for the islands of Hawaii. There used to be a ninth stripe, but after the state gained its independence, there were only eight.

Full History of the State of Hawaii’s Flag

Everything started in 1794 when British Captain George Vancouver gave a Union Jack flag (representing Great Britain) to King Kamehameha I as a gift. King Kamehameha needed assurance that Hawaii would be under British protection because he and Vancouver had grown close.

Even though King Kamehameha I flew the British flag for the following 22 years in a variety of Hawaiian Islands locales, the cession deal with Vancouver was never formally recognized by the British Parliament, therefore it is unknown what the monarch believed the flag to stand for.

A distinctive Hawaiian flag was developed by 1816, though its exact ancestry is unknown. It is thought that a number of persons assisted King Kamehameha I in developing the Hawaiian flag.

Although it is unclear if King Kamehameha believed that the Hawaiian Islands were protected by the British, the British Union Jack can be seen in the upper left corner of the flag as a mark of respect for Captain Vancouver.

Alexander Adams is said to have been the first person to position the Union Jack in the flag's upper left corner. Adams originally arrived in the Hawaiian Islands in 1810 on the ship Albatross, and he was quickly given command of many Kamehameha-owned ships.

The Hawaiian people had never utilized flags prior to the creation of the Hawaiian flag, at least not in the same way that other significant nations had adopted flags as national symbols.

Adams travelled to China in 1817 as commander of the Kamehameha sandalwood trading fleet, but he was refused admission into the harbor at Macao because the ship's flag was not recognized. For the first time, a ship traveling to a foreign port flew the Hawaiian flag.

The eight horizontal stripes of the Hawaiian flag are thought to represent the eight major Hawaiian Islands. The flag’s crimson stripes are thought to depict Hawaii gods, while the white represents truth, and the blue signifies the ocean.

The Kingdom of Hawaii was the original owner of the Hawaiian flag. Following the collapse of the monarchy, the flag first represented the Hawaiian Territory and later the Republic.

In the end, it stood in for the State of Hawaii. There used to be a ninth stripe, but after the state gained its independence, there were only eight.

This is how the current flag of Hawaii came to be.

Fun Facts About the Hawaiian Flag

Hawaii’s flag is the 11th most popular flag design. The Hawaii flag is acknowledged as being well-liked by the general populace. Out of 72 Canadian territories and US states, Hawaii has the 11th most popular flag design, according to data by the North American Vexillological Association (NAVA). There is no disputing the beauty of Hawaii's state flag. It has an appealing and basic design that is both simple and vibrant. Perhaps for this reason, it consistently ranks among the most well-liked flags among the general populace.

The state of Hawaii celebrates its own Flag Day. The 14th of June is celebrated as Flag Day every year in the United States. Having said that, Hawaii has set aside a specific day each year to commemorate the adoption of its state flag. The 31st of July is celebrated as Hawaii Flag Day. Hawaii's state flag is proudly flown on Hawaiin Flag Day by both locals and visitors.

Was Hawaii a British colony?

What language do Hawaiians speak?

Why do they fly a British flag in Hawaii?

Buy Made in America Hawaii Flag!

When consumers like you purchase a product created in the USA, the employer is encouraged to establish factories and engage staff there. You should also take into account the fact that many American firms are small ones. You support a person in your community by purchasing a tractor from a nearby tractor manufacturer. You support a local businessperson by buying fruit from a farmers' market in your area. You should therefore make an effort to purchase a few American-made items as frequently as you can.

Your purchase of an American-made item will help an American business. That business will invest in America and increase hiring. A business's tax revenue from profits will be used to hire more police officers and firefighters. They will consequently spend more money at nearby stores, eateries, and other attractions. This implies that the funds are contributing to the strengthening of America.

Carrot-Top Industries is proud to offer exclusive Made in the USA products!

Carrot-Top Industries offers a variety of official flags for the State of Hawaii. We are proud to offer Hawaiian flags made for indoor use, outdoor use and to be displayed as a set!

Indoor Hawaii state flags make lovely interior displays. These flags, made with our special Beacon® nylon, have fine stitching and gorgeous, vibrant colors. Hawaii flags come in a range of sizes that are made to fit the height of your pole and produce the display style you want.

Outdoor Hawaiian state flags are made with the best materials and craftsmanship and are offered in two Carrot-Top unique fabrics. Hawaii outdoor flags are offered in Patriarch® polyester and Beacon® nylon. These are the two flags that offer the most versatility. These flags are always proudly Made in America.

Our Hawaii Flag Sets are a wonderful way to express your admiration and pride for the wonderful state of Hawaii. You can design stunning, impressive displays using Carrot-Top's flag sets in any way you like. Choose a style that complements your room or space the best. You can select the flag, flagpole, and (pole) finish for Hawaii Flag Sets.

Reach out to one of our Customer Care Representatives today through our online contact form for any questions about Hawaii State flag or American flag!