POW/MIA flags from Carrot-Top Industries are a great way to show our gratitude to the brave men and women who were taken captive or missing in action during wartime. Our collection includes a variety of flags for all types of use. Browse our outdoor flags available in nylon and polyester material. Indoor designs make the perfect display at government buildings or Veterans organizations. We also offer parade and mini flags for patriotic celebrations and holidays. For every event and occasion, you'll find the ideal flag that honors our American soldiers. 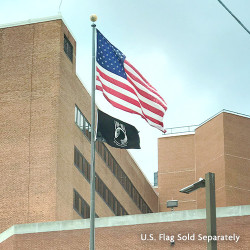 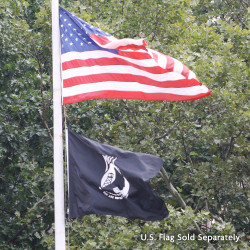 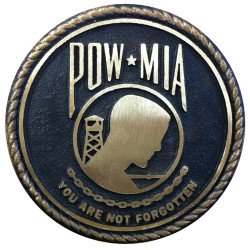 Let’s start from the beginning. The desperate struggle to find the information and pledges for the government to invest more efforts into seeking those who were missing in action was finally represented with a memorable black and white flag in 1971.

The POW/MIA flag initiator is Mary Hoff, a wife of MIA Michael Hoff, and a member of the National League of Families of American Prisoners and Missing in Southeast Asia. Up until then, there was no unanimous symbol for all those American soldiers whose fate was not discovered yet, even when years had passed from the end of the war. The flag was first designed to stand for American POWs and missing persons in Southeast Asia and the Vietnam Combat, but it was subsequently officially accepted to represent all such war casualties.

Newton Heisley designed the POW/MIA flag. Norman Rivkees, Vice President of Annin & Company, was contacted by Mrs. Hoff, who requested that he create a flag for their cause. The work was given to Newton Heisley, a creative director in New Jersey and former World War Two pilot.

The POW/MIA flag has a white silhouette of a POW standing in front of a guard tower and barbed wire on a background of black. The words "POW/MIA" are written above the silhouette, and below it, in white on a black background, are the words "You Are Not Forgotten." "Missing in action" is referred to as "MIA." Newt Heisley came up with the flag's first design.

The flag is unclear since it suggests that people who are labeled as MIA might actually be held hostage. There is "no strong evidence that demonstrates that any American remains alive in captivity in Southeast Asia," according to the official position of the U.S. federal government, which is held by both political parties. [6] The U.S. Defense POW/MIA Accounting Agency is in charge of conducting investigations into POW/MIA issues and providing centralized management of prisoner of war and missing personnel affairs within the U.S. Department of Defense. 1,585 Americans were still missing as of October 2020, with 1,007 of them being listed as being pursued further, 488 as not being pursued further, and 90 as being delayed.

When Did We Start Honoring Prisoners of War and Missing in Action? A Brief History

The official symbol of the National League of Families of American Prisoners and Missing in Southeast Asia is shown in white on a black backdrop on the POW/MIA flag, which is also known as the POW/MIA flag and was adopted in 1972. The POW/MIA flag must be flown on specific federal sites, including the U.S. Capitol Building, on all days the U.S. flag is flown, according to the National POW/MIA Flag Act, which was signed into law in 2019.

POW/MIA, or prisoners of war/missing in action, is an abbreviation. The phrase was used to describe the problem of those who were listed as missing in action or taken captive during the Vietnam War (November 1, 1955–April 30, 1975). Following the 1973 Paris Peace Accords, the United States received the return of hundreds of POWs. However, there were still over 2,500 soldiers who were listed as "lost in action," many of them were shot down by Airmen whose bodies could not be found.

How Many Soldiers are Unaccounted For?

When discussing the origins of the POW/MIA flag, it is impossible to avoid showing sorrow for those who have not yet returned.

Over 2,500 servicemen were recorded as prisoners of war or missing in action at the end of the Vietnam War. The families of the missing kept putting pressure on the government since not enough cases were being solved. The president and Congress established the National POW/MIA Recognition Day in 1979 to honor their efforts and demonstrate that those warriors who vanished while defending the nation are still being sought after.

Why did the Vietnam War matter so much in terms of POWs or MIAs? Because this was the first war the U.S. lost, it was able to thoroughly investigate the area and the battlefields for all of its missing soldiers.

The POW/MIA flag eventually came to represent all prisoners of war and missing in action (MIA) from American-led conflicts. There are currently more than 82,000 Americans who are unaccounted for (from the Second World War, the Korean War, the Vietnam War, the Cold War, and all other conflicts so far).

Fortunately, after the Vietnam War, things have clearly changed for the better. For instance, there were no missing in action personnel after the end of the Afghan War.

Founded in the District of Columbia on May 28, 1970, the National League of Families of American Prisoners and Missing in Southeast Asia is a nonprofit organization. Wives, kids, parents, siblings, and other close relatives of Americans who were or are listed as prisoners of war (POW), missing in action (MIA), killed in action/body not recovered (KIA/BNR), and returning American POWs from the Vietnam War make up the voting membership. POW/MIA and KIA/BNR family who do not satisfy the criteria for voting membership, veterans, and other concerned people make up associate membership. The League is supported by donations from the families, veterans, and other individuals. It is a nonprofit, tax-exempt 501(c)3 organization that promotes humanitarianism (FEIN #23-7071242). The sole aim of the League is to secure the release of all detainees, the most thorough investigation into the disappearances, and the return of all bodies that can be found of those who perished while defending our country during the Vietnam War.

In the late 1960s, the League began on the west coast. The wife of a high-ranking POW started a loosely coordinated movement that eventually became the National League of POW/MIA Families because she felt that the US Government's policy of maintaining a low profile on the POW/MIA issue while advising family members to refrain from publicly discussing the problem was unjustified. The first POW/MIA tale was released in October 1968. The families started corresponding with one another as a result of the publicity, and the group's size increased from 50 to 100 to 300 and continued to grow. The first significant event in which hundreds of relatives took part involved small POW/MIA family groups inundating the North Vietnamese representation in Paris with telegraphic enquiries for the detainees and missing.

The need for legal incorporation was eventually realized. The League's charter and bylaws were adopted at a special ad hoc assembly of the families held in May 1970 at Constitution Hall in Washington, DC. A seven-member Board of Directors, elected by the League's voting membership, which has grown to almost 1,000 members, convenes regularly to set policy and direction. The League is represented in most states by Board Members, Regional Coordinators in charge of operations in multi-state areas, and State Coordinators.

Since 1979, the third Friday in September has been designated as National POW/MIA Recognition Day. On this day, as a nation, we pause to remember the heroic men and women who were captured as POWs and those who were or are still missing in action (MIA). More than 2,500 POWs and MIAs from the Vietnam War were unaccounted for in the 1970s, and their families pressured the American government to take responsibility. They wished to prevent the loss of their loved ones.

Family pressure led to President Jimmy Carter officially establishing the National POW/MIA Recognition Day through a signed proclamation. Following that, the current president has proclaimed this special day every year. Every year, a national event is held, generally at the Pentagon, and each branch of the armed forces is represented. The U.S. and POW/MIA flags fly at half-staff from sunrise to sunset as communities around America commemorate this day with special memorial ceremonies.

The POW/MIA flag must be flown on six specific days each year, including Armed Forces Day (the third Saturday in May), Memorial Day (the last Monday in May), Flag Day (June 14), Independence Day (July 4), National POW/MIA Recognition Day (the third Friday in September), and Veterans Day (November 11). The POW/MIA flag has been flown at government facilities and veteran organizations during parades, patriotic holidays, and other special events over the years.

President Donald J. Trump signed the National POW/MIA Flag Act into law on November 7, 2019. In remembrance of all POW/MIAs, this law mandates that the POW/MIA flag be flown on days when the American flag is raised on particular federal property. Only a select group of federal structures are covered under the National POW/MIA Flag Act, including the Pentagon, White House, U.S. Capitol, Department of Veterans Affairs headquarters, and all U.S. Post Offices nationwide. Additionally, the flag must be flown at all significant American military stations, every national cemetery, and well-known war-related locations like the Vietnam Veterans Memorial and the World War II Memorial.

The National POW/MIA Flag Act guarantees that the POW/MIA flag will be flown every day as a constant reminder of all the valiant men and women who were captured or are still missing in action during times of war. The remains of 82,000 American service men have not yet been located, according to the Defense POW/MIA Accounting Agency (DPAA). 75 percent of them are reportedly missing in the Asia-Pacific region, most likely at sea. According to the DPAA, as of 2018, the following wars include missing soldiers: 73,515 from World War II, 7,841 from the Korean War, 1,626 from the Vietnam War, 126 from the Cold War, and 6 from the Six-Day War (Conflicts since 1991). By displaying this flag, we are demonstrating our support for former and current prisoners of war, those who have gone missing in action, and their families.

Let's all pause on this next National POW/MIA Recognition Day (September 18) to reflect on the sacrifices made by our POW and MIA service members who were able to return home as well as the service members who are still missing. Fly the American and POW/MIA flags at half-staff as a show of support for the people who have served and are actively serving our nation.

Get in Touch with us Today!

Our Carrot-Top Customer Care Team is eager to assist you with your order today. Contact us or get in touch with us via our Live Chat regarding any questions pertaining to an American flag, POW/MIA flag, or any other related products.