The Alabama state flag, adopted in 1895, visually expresses the state’s sovereignty, history, and pride. The Alabama flag depicts a crimson cross of St. Andrew on a field of white. The diagonal cross on the flag is called a saltire and closely resembles the state flag of Florida. Southern Alabama was originally a part of Florida when the Spanish controlled the territory. The cross on the Alabama flag pays homage to the blue diagonal cross of the Confederate Battle Flag carried by Southern regiments during the Civil War. The colors crimson and white represent purity and courage. The Alabama state flag simply and elegantly represents the freedom of the 22nd state admitted to the Union in 1819. 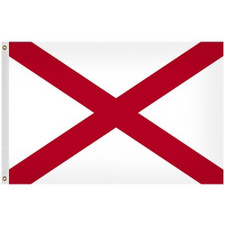 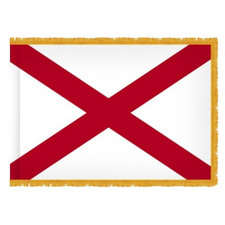 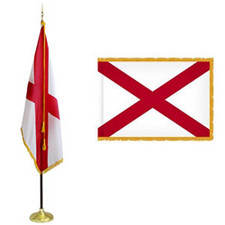 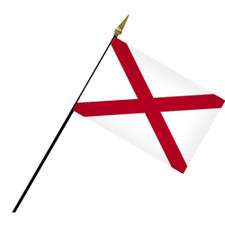 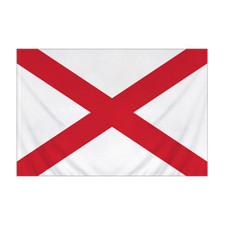 Full History of the Alabama Flag

Act number 383 was passed by the Alabama Legislature on February 16, 1895, and it established the Alabama State Flag. The state flag of Alabama was to be a red cross of St. Andrew on a white background, as stated in the Acts of Alabama, 1895. The bars that make up the cross must be at least six inches wide and must span the flag diagonally from side to side. The act did not specify a rectangular or square flag.

The Alabama state flag's design has generated a lot of uncertainty and rumor throughout the years. Dr. Thomas Owen, head of the Alabama Department of Archives and History, conducted interviews with people who had been alive when the measure was proposed before producing the 1915 Alabama Official and Statistical Register. The St. Andrew's cross, in particular, was meant to "preserve in permanent form some of the more recognizable aspects of the Confederate battle flag," he said in his conclusion. Based on the "regulations governing the Confederate battle flag," Owen concluded that the flag ought to be square. However, during the Civil War, flag producers did not always abide by these rules, which were specific to one design of the battle flag used by the Army of Northern Virginia, and rectangular St. Andrew's Cross battle flags were frequently used by the Army of Tennessee. In addition, the initial renderings of the state flag that were printed soon after its adoption all showed a rectangular flag.

A resolution naming a flag created by a group of Montgomery women as the convention's official flag was approved by the Secession Convention on January 11, 1861. The Republic of Alabama Flag is another name for this flag. The Goddess of Liberty was depicted on one side of the flag, holding an unguarded sword in her right hand, and a little flag with one star in her left. Above this figure, the phrase "Independent Now and Forever" was written in an arch. A cotton plant with a rattlesnake coiling up in it was on the other side of the flag. The Latin phrase "Noli Me Tangere" is written beneath the cotton plant (Touch Me Not). This flag was flown until February 10, 1861, when harsh weather caused it to be damaged and it was taken to the governor's office. No one ever flew it again.

The First or Second National Flag of the Confederacy was flown from March 4, 1861, until General James H. Wilson took control of Montgomery in April 1865. Following the Civil War, the American flag was flown at all formal events.

Fun Facts About the Alabama Flag

Alabama's flag is ranked number 52 in terms of design excellence out of 72 Canadian province flags, US state flags, and US territories flags by the North American Vexillological Association (NAVA).

The flag originated in the late 19th century

The cross is known as a saltire

What does the Alabama flag symbolize?

Who came up with the design for the current Alabama flag?

The finest way to support the state of Alabama is with an indoor Alabama state flag. These exquisite flags are crafted from the best materials and will look stunning wherever they are displayed. The durable state flags from Carrot-Top have fluffy, gold fringe. Choose between two practical sizes.

Also, view our full list American Flags that you can pair with your state flags.

Fly an American-made flag with pride!

By getting your Alabama state flag from Carrot-Top Industries, you can show your support for Made in the USA items right now.