Here at Carrot-Top, we are proud to offer high-quality Made in America flags, including our West Virginia Flags! By placing an order with Carrot-Top Industries, you can be sure you are getting a flag that is perfect for your needs.

Read more about the WV Flag below the products. 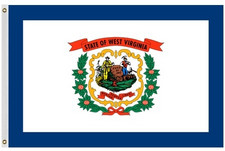 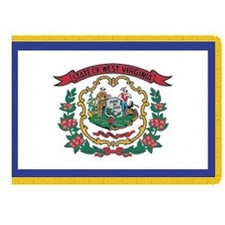 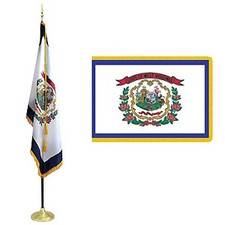 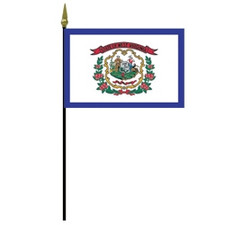 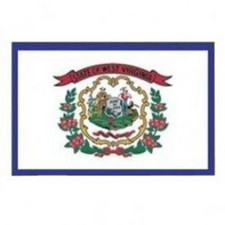 History of the West Virginia Flag

Pro-Union sympathizers in western Virginia made distinctive flags to demonstrate their support for the Union cause before West Virginia broke away from Virginia on June 20, 1863. Prior to Virginia's separation, the citizens of Kingwood built a flagpole that was about 105 feet (32 m) high and flew a homemade streamer with the word "UNION" on it. The Fifth Regiment Virginia Volunteer Infantry bore a banner with the legend "5th Va. Regiment" in 1861, as with other western Virginia units of the Union Army. These flags were manufactured by encouraging women.

The Fourth West Virginia Volunteer Infantry Regiment's battles at Missionary Ridge, Jackson, Charleston, and Vicksburg were all acknowledged on the flag, which the West Virginia Legislature approved in January 1864. This was the first of several battle flags used by soldiers from West Virginia regiments throughout the war to represent the state after statehood. Each of West Virginia's Union regiments received a state battle flag throughout the conflict. These early state flags were 6-foot (1.8 m) panels of silk fabric that were dark blue and edged in golden fringe. The state's recently created seal, the name of the relevant West Virginia regiment, and the names and dates of the engagements in which they had taken part were all painted on the reverse side of these flags. The American national crest was painted on the back and featured a bald eagle with its wings spread wide, holding an olive branch in its left talon and a bundle of 13 arrows in its right, along with a multicolored shield across its breast. The eagle held a scroll bearing the Latin phrase "E pluribus unum," the country's motto, in its beak (English: "Out of Many, One"). West Virginia did not have an official flag after the American Civil War ended, and the issue was not raised until the turn of the 20th century.

When the West Virginia State Commission to the Louisiana Purchase Fair in St. Louis stated that the state needed a flag or ensign to represent and differentiate itself among the other U.S. states at the exposition, the necessity for an official state flag became apparent. The commission adopted and used a state flag of its own design, which was a "sprig of mountain laurel upon an immaculate white field with a faint blue border," at the West Virginia building at the exposition in place of the official state flag.

The West Virginia State Commission suggested that their flag design be used as the official state flag in its report to the West Virginia Legislature. The West Virginia Legislature passed Joint Resolution Number 16 on February 24, 1905, approving the commission's flag design under the Albert B. White administration as governor. The flag design recommended by the commission was adopted by the legislature with the addition of a carmine red fringe or border. The legislature gave its approval for the use of the state flag on special occasions that called for or were deemed appropriate for a unique display of the state's uniqueness.

According to a 1905 resolution: “Said state flag shall be in length and breadth in the proportion of nine to thirteen, this being the same as the flag of the great American Republic of which West Virginia forms a part; the field thereof shall be pure white, upon the center of which shall be a sprig of the rhododendron maximum or "big laurel," having flowers and leaves; and on the reverse side shall be the state coat-of-arms and the motto; the field of pure white shall be bordered by a band or strip of blue, and this in turn shall be bordered by a strip of fringe of carmine red; and said flag shall be regarded and used as the West Virginia state flag on all occasions where a special display of the state's individuality shall become necessary, or be regarded as appropriate.” Schools and other establishments in West Virginia started flying the new state flag after it was formally adopted by the legislature. The new state flag, which was 5.5 feet (1.7 m) long and was purchased by the instructors and pupils at the schools in Ronceverte in June 1906, was flown alongside the American flag during salutes and other patriotic activities.

The text on one side of the 1905 state flag design was facing the staff by 1907, and the different colors on each side were visible through the opposing side of the flag's white field of fabric. This made the design utterly unworkable, according to the West Virginia Legislature. According to the state assembly, this eliminated "the distinctive qualities of the banner and left the state without a defined official flag." In order for West Virginia to be appropriately represented at the Jamestown Exposition in Norfolk, the state legislature attempted to fix the state flag's design problems in 1907. The West Virginia Legislature enacted Joint Resolution 2 on February 25, 1907, under the leadership of Governor William M. O. Dawson, which modified the flag by deleting the seal and motto from the back and changed the color of the surrounding fringe from carmine red to old gold. The reverse of the flag was altered to feature "a spring or sprig of the rhododendron maximum" in place of the seal and slogan.

The 1907 Joint Resolution states: “Said state flag shall be in length and breadth in proportion the same as the flag of the great American Republic of which West Virginia forms a part; the field thereof shall be pure white, upon the center of which on the observe side shall be the great seal or coat of arms of the state, beneath which shall appear the legend "State of West Virginia," in a scroll; on the reverse side shall appear a sprig or sprigs of the rhododendron maximum, or big laurel, our state flower, having blossoms and leaves; the field of pure white shall be bordered by a band or strip of blue, and this in turn shall be bordered by a strip or fringe of old gold; and said flag shall be regarded and used as the West Virginia state flag on all occasions where a special display of the state's individuality shall become necessary, or be regarded as appropriate.”

The 1907-approved flag design served as the state's official flag until 1929. The state of West Virginia was looking for a flag design that could be mass-produced at a low cost for the state's public schools. Due to the two different symbols on each side of the flag—the state's flower on the reverse and its coat of arms on the obverse—the 1907 flag proved to be more expensive to create. The West Virginia Legislature determined that the state flag should be imprinted on both sides with a design that incorporates both the coat of arms and the official flower. By West Virginia Senate Joint Resolution Number 18, which was passed on March 7, 1929, the West Virginia Legislature formally adopted the current state flag's design.

The primary goals and resources of West Virginia are represented by the state's coat of arms in the middle of the flag. The date of West Virginia's statehood admittance to the Union, "June 20, 1863," is written on an ivy-covered boulder in the center. To emphasize the significance of the state's struggle for liberty, two crossed hunting rifles and a Phrygian hat (also known as a "Cap of Liberty") are placed in front of the boulder. On either side of the boulder, a farmer and a miner stand as symbols of those two industries. In front of a sheaf of wheat and a cornstalk, the farmer is positioned to the left, holding an ax and plow. The miner is positioned to the right, holding a pickaxe, with two barrels, an anvil, and a sledgehammer behind him.

What is West Virginia’s motto?

What is West Virginia famous for?

West Virginia, a state in the Appalachian area, offers some of the nation's most untamed terrain. The state is well-known for its variety of outdoor activities, including hiking, mountain biking, skiing, and whitewater rafting. Its rolling mountains, hills, and valleys gave it the moniker "The Mountain State."

What is the nickname for West Virginia?

The Mountain State. Since West Virginia is the only state entirely surrounded by the Appalachian Mountains and has the highest average elevation of any state east of the Mississippi River, it is known as the Mountain State.

Our West Virginia Flags are Made in the USA!

Like almost all of our state and national flags, the West Virginia state flag is always proudly Made in the USA. This ensures support for domestic businesses and the American people by promoting independence from other countries and guaranteeing that jobs stay in the United States.

What West Virginia State Flags Do We Offer?

West Virginia indoor flags come in sizes 3' x 5' and 4' x 6' and are made of our trademark Beacon® Nylon. The left side of these flags has a lined pole sleeve, and the three other sides have thick, typical gold fringe. With an 8' indoor or parade flagpole, the 3' x 5' West Virginia flag is exhibited at its best. The 3' by 5' flag creates traditionally lovely displays when used with Carrot Top's 8' Jointed Oak finish Pole and 5-9' Majestic® Telescopic Pole. The 9' indoor or parade flagpole is required for the 4'x6' West Virginia flag, which makes a stunning show when used with either the Majestic Telescopic Pole or our 9' Jointed Oak finishing pole.

Outdoor West Virginia flags come in a range of sizes and are made from two of Carrot Top's unique fabrics. These flags produce vibrant displays that elegantly and stylishly reflect your love for the state of West Virginia. Bright, vivid colors and excellent lock stitching are featured on outdoor flags.

Sets of West Virginia flags blend the elegance of classy flagpoles with the beauty of our superb flags. Create a design and display type that best suits your preferences and available space. You can select the flag, flagpole, and pole finish for our flag sets. Match your current decor or create a completely new appearance.

Our Carrot-Top Customer Care Team is happy to assist you with your order now. Please contact us right away if you have any questions regarding our American flags or our West Virginia state flags, which were proudly made in America.

To ensure you order the right size flag for your flagpole, be sure to review our comprehensive flag buying guide!