With more than 40 years of experience in the flag business, we have the knowledge and skills to meet all of your state and American flag requirements. Our superior nylon and polyester fabrics are used to create our Iowa Flags, which are covered by our Industry's Best Six-Month guarantee against defects, fading, or ripping. These flags are also proudly created in the United States of America.

The "Hawkeye state's" history as a component of the French Louisiana Territory is commemorated by the state flag of Iowa. The Iowa flag, a vertical tricolor banner of blue, white, and red, is meant to imitate France's flag. 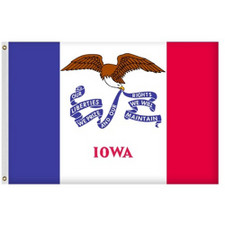 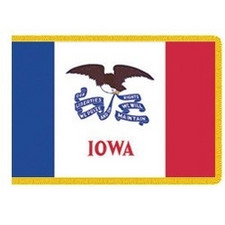 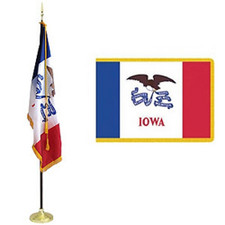 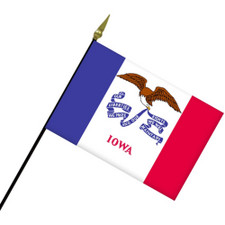 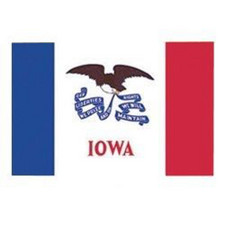 For the first 75 years of its existence, the State of Iowa was without a flag, partly due to appeals for national harmony during and after the American Civil War, in which Iowa fought for the Union. The first request for a state flag was made during World War I by the Iowa Daughters of the American Revolution, but other states already had flags to represent themselves. Iowa National Guardsmen stationed along the Mexican border made many requests for a flag. One of three states without a banner in 1917 was Iowa.

Dixie Cornell Gebhardt, a member of the DAR and a citizen of Knoxville, Iowa, designed the flag after being inspired by the Iowa guardsmen. It was presented to the Iowa State Council for Defense on May 11, 1917, when it was accepted. It had been approved by the DAR flag committee in early May 1917. Although the flag was handed to Iowan troops for designation, it would take another three to four years before it was formally recognized as the state flag.

On March 19, 1918, Governor William Lloyd Harding of Iowa publicly adopted the flag on behalf of the state; nevertheless, legislative adoption efforts were unsuccessful in February 1919. However, the Iowa Daughters met with lawmakers in September 1920, pleading with them to once more embrace the flag and asserting that earlier failures were brought on by expensive costs.

Despite not being adopted, the banner was frequently used to symbolize Iowa around the country, particularly in Continental Hall where it was displayed with other official banners of other states but was clearly marked as such. The wife of Congressman Horace Mann Towner stated that this was still another cause for the flag to be formally adopted.

After much discussion on the adoption of an official flag in January 1921, the flag was finally approved as law in mid-March of the same year.

Iowa's flag was ranked 42nd in terms of design quality in a 2001 study by the North American Vexillological Association (NAVA) out of 72 Canadian province, American state, and American territorial flags.

The Iowa flag, a vertical tricolor banner of blue, white, and red, is meant to imitate France's flag.

Each hue on the flag has a purpose according to Dixie Cornell Gebhardt: red denotes bravery; white purity; and blue loyalty, justice, and truth. Both flags have blue, white, and red colors from left to right, yet Iowa's banner has a bigger white part, according to The Des Moines Register, which stated that the design harkens back to Iowa's past as a French colony. According to The Register, the red "Iowa" represents the "Iowa soldier's [writing] in blood on the white page of history his unwavering commitment to defend the ideals embodied by the banner and its glorious motto."

Interesting Facts About the Iowa Flag

The Design Has Never Changed

The Iowa flag's official design has never been altered. Several state flags have undergone two or three design revisions. Even more design adjustments have been made to other products. But the Iowa flag has retained the same style ever since it was introduced in 1921. “Our liberties we respect and our rights we shall maintain” is written on a streamer in the state's official slogan on the Iowa flag. Additionally, it has a red, white, and blue color scheme.

The flag's creator, Dixie Cornell Gebhardt, was described as "Iowa's Betsy Ross" by the governor of Iowa. Of course, Ross' contribution to the American flag is being made reference to here. Ross designed one of the very first American flags during the American Revolution. There were 13 stars and 13 red and white stripes on this early iteration of the American flag.

FAQ About the State of Iowa

What is Iowa known for?

The production of maize and pork, political primaries, and the Iowa State Fair are just a few of the things Iowa is famous for. It was admitted to the union as the 29th state in 1846, and it is the only one with the Mississippi and the Missouri as its two external borders.

Why is Iowa called the Hawkeye State?

It is unclear how Iowans came to be known as Hawkeyes, but the moniker was first mentioned in print in 1859. Some individuals think that Burlington judge David Rorer came up with the moniker after one of the characters in James Fenimore Cooper's The Last of the Mohicans. James G. Edwards of Fort Madison also endorsed the name.

What are five interesting facts about Iowa?

1. Since 1972, the first caucuses—the gathering of voters to pick delegates who would cast their ballots for their preferred candidate at the next convention—have officially started each U.S. presidential contest in Iowa.

2. The richest natural resource in the Hawkeye State is its fertile soil, which farmers utilize to cultivate maize and soybeans, the state's two most important commodities. The majority of maize in the country is grown in Iowa, which also turns some of it into ethanol, the country's leading producer of this fuel.

3. At Effigy Mounds National Monument, there are more than 200 prehistoric clay mounds in the forms of enormous panthers, bison, deer, and other animals. Many Native Americans hold the mounds in high regard, and it's possible that certain tribes utilized them to define their territory.

4. All of the following people were born in Iowa: the U.S. President Herbert Hoover, the talk show presenter Johnny Carson, the performer Buffalo Bill Cody, and Mildred Wirt Benson, who authored the Nancy Drew mystery series under the pen name Caroline Keene.

5. In Eldon, Iowa, there is a house that served as the model for Grant Wood's well-known picture "American Gothic." It's a popular location for taking selfies, and guests are invited to strike the same position as the figures shown there!

Our Iowa Flags are Made in the U.S.A

Our American and Iowa flags are two examples of the Made in America goods that Carrot-Top Industries is proud to sell. American goods are excellent investments, and our flags are among the greatest ever produced, easily exceeding our high standards for quality.

What Iowa Flags Does Carrot-Top Offer?

Carrot-Top is proud to offer Iowa flags for indoor display, outdoor display and even Iowa Flag Sets! This way you can be sure that you are getting exactly what you need.

Indoor Iowa flags are created using the best materials, have vivid, strong colors, and exhibit exceptional craftsmanship. These flags have superb embroidery and are made from our exclusive Beacon® nylon. To accommodate the height and position requirements of your flagpole, indoor flags come in a range of sizes. A lined pole sleeve around the left side and customary gold fringe around the three other sides complete indoor Iowa flags. There are two sizes available for the Iowa flag: 3' x 5' and 4' x 6'. With our Majestic Telescopic Pole, another Carrot Top exclusive brand, both flags go together flawlessly. When used with our 8' Jointed Oak finishing pole and 3"x 5" flag, a traditional presentation is produced. With our 9' Jointed Oak finishing pole, the 4' by 6' Iowa flag also displays beautifully.

Outdoor Iowa flags are made with the best materials and with exceptional craftsmanship. These flags are made from two of our premium materials: Patriarch® polyester and Beacon® nylon. Each brand is created specifically to fit the needs of a specific environment in order to ensure that your flag will prosper and endure. There are two fabrics available for our outdoor Iowa flags. The sturdy, long-lasting nylon used to create the Beacon® nylon Iowa flag dries quickly and flies brilliantly in the smallest breeze. The following sizes are available for beacon flags: 12" x 18", 2'x 3', 3'x 5', 4'x 6', 5'x 8', 6'x 10', and 8'x 12. These durable flags are designed for locations with softer weather and less powerful winds. The durable, woven polyester used to create our Patriarch® polyester Iowa flags has the look and feel of cotton. Flags from Patriarch® are made to survive strong winds and bad weather. These flags are available in three different sizes: 3'x5', 4'x6', and 5'x 8'. For simple connection to your pole, both flags have brass grommets and a canvas header on the left side.

Beautiful and impressive interior displays and parade sets are produced by Iowa Flag Sets. With the Iowa flag sets from Carrot Top, you can create a look and feel that perfectly complements your room and sense of style. The best flags and the most functional flagpoles are used to construct our Iowa flag sets. Our 5-9' Majestic Telescopic Pole is made to fit most flags and may be displayed in most locations. This unique Carrot Top pole adjusts with a few quick twists and is portable and simple to put together. Gold, wood-grained, and chrome flagpole treatments are also readily available. The Jointed Oak finish pole, which is more conventional, is also present in Carrot Top. The 8' Jointed Oak flagpole looks best in rooms with a ceiling clearance of 8.5' or less and flags no larger than 3' x 5', while the 9' Jointed Oak finishing pole is ideal for ceiling clearances of 9.5' or more and flags no larger than 4'x 6'. The 3' x 5' and 4' x 6' Iowa flags complement our unique Majestic Telescopic Poles nicely. Each Carrot Top flag set comes with a weighted base, an elegant flagpole topper, and a gold rope with tassel.

Let Our Team Help You Today!

At Carrot-Top Industries, we take great pride in our perseverance and know-how, which go back more than 40 years. We draw on our extensive knowledge to make sure that customers like you get the greatest, most accurate information available. Fill out our Contact Us Form today! Any of our customer service representatives will be delighted to assist you in placing an order for an Iowa state flag, an American flag made in America, a flagpole, any of our customized products, or even one of our military flags! To ensure that you get the correct flag, please read our comprehensive buying guide for state and national flags. If you have any questions, get in touch with us straight away!