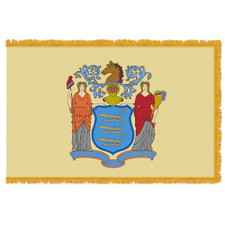 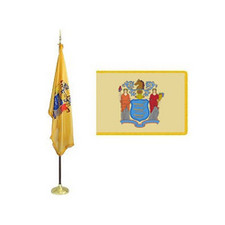 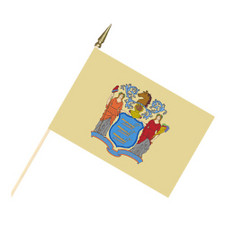 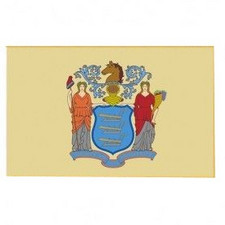 Pierre Eugene du Simitiere created the initial version of the flag of New Jersey in 1777, and a small revision was made in 1928.

The New Jersey great seal and flag both include the seal as their main design element.

The "Garden State" moniker for New Jersey comes from the state's coat of arms, which has a horse's head with a helmet underneath it and three plows on a shield to symbolize the state's agricultural heritage. The state motto, "Liberty and Prosperity," is symbolized by the two goddesses. Left is the side of liberty. She is holding a staff that has the word "liberty" written underneath her with a liberty cap on it. Ceres, the goddess of agriculture, is the figure on the right.

She is clutching a cornucopia, and below her are the words "prosperity."

The buff color of the flag is attributed in part to George Washington, who on September 14, 1779, had directed that the uniform coats of the New Jersey Continental Line be dark blue with buff facings, according to the minutes of the New Jersey General Assembly for May 11, 1896, the date on which the Assembly officially approved the flag as the state emblem. Up to that point, only his own uniform and that of the other Continental generals and their assistants had buff-colored facings. Then, on February 14, 1780, the Continental War Officers in Philadelphia ordered that all regiments' uniform coat facings match the color of the state flags of their respective regiments.

According to New Jersey statute Title 52, 2-1, the seal is as follows:

The three ploughs in an escutcheon of azure will serve as the state's arms, while Liberty and Ceres will serve as its supporters. The great seal of this state will be carved on circular silver that is two and a half inches in diameter and three-eighths of an inch thick. The Goddess of Liberty is seen holding a pole in her dexter hand and wearing a gules cap with a band of azure at the bottom and six argent stars on the band, as well as an overdress of tenne and an argent underskirt. Her feet are sandaled, and she is standing on a scroll. Ceres: Similar to Lady? Liberty, but with an overdress; clutching an or cornucopia with apples, plums, and grapes encircled by leaves in the left hand; and, on top of it all, wearing a vert chaplet of wheat spears. Six-barred shield with a sovereign's helmet perched on top; argent and azure for the wreath and mantling. Crest: A proper horse's head. A scroll of azure with three waves or folds, bordered with tenne, supporting the goddesses beneath the shield reads "Liberty and Prosperity" on the higher folds and "1776" in Arabic numerals on the lower fold. "The Great Seal of the State of New Jersey" is to be inscribed around the arms.

A competition to design a new flag for New Jersey was held in 2016 by NJ Advance Media and NJ.com. Although a winning design by Fair Haven resident Andrew Maris was picked, no legislative action has been made to allow for the adoption of a new flag.

The following items appear on the New Jersey state coat of arms:

What is the state of New Jersey famous for?

There are many characteristics about New Jersey that are well-known, such as its stunning beaches, congested roadways, delicious food, fierce politics, and varied culture. People who were born and nurtured in this thriving state have a lot to be proud of, including its distinctive residents, breathtaking scenery, and thrilling sports.

Are New Jersey and New York the same state?

There are two different states in the US: New York and New Jersey. New Jersey is the state immediately below New York, which is located in the northeastern part of the country.

What is the nickname for New Jersey?

Our New Jersey Flags are Made in the USA

We at Carrot-Top Industries are happy to sell Made in the USA goods like our New Jersey flags and American flags! You immediately contribute to the domestic economy and promote American independence by buying products that are Made in the USA. America's love for buying Made in America products is understandable!

What New Jersey Flags Do We Offer?

Indoor New Jersey flags produce traditional displays of the lovely state flag of New Jersey in your residence, place of business, institution of higher learning, or other facility. With our customary gold fringe, this distinctive buff-colored flag stands out even more.

Outdoor New Jersey flags come in two different fabric designs and make stunning outdoor displays of the state flag. Carrot Top creates flags that meet the requirements of various climates' different environmental and climatic conditions. Outdoor flags come in a range of sizes and are made of Patriarch® Polyester and Beacon® Nylon.

Beautiful flags, elegant flagpoles, and distinctive (pole) finishes are all combined in New Jersey flag sets. With the help of our flag sets, you can create the ideal display for your needs and preferences. You can either design a whole new appearance or create a New Jersey display that suits your current decor.

We at Carrot-Top are happy to be supported by more than 40 years of grit and expertise. Any of our Customer Care Representatives would be happy to help you place an order for a New Jersey state flag, an American flag, a flagpole, any of our customized goods, or even one of our military flags right now! Contact us right now! Please feel free to browse our comprehensive state flag buying guide as well.