The Vermont state flag reflects the industry, beauty and history of “The Green Mountain State”. The Vermont flag displays the state’s Coat of Arms on an azure blue field. The Vermont Coat of Arms pictures a lofty pine, symbolic of Vermont’s pine forests; a cow and three sheaves of wheat, representing the Vermont agriculture and dairy industries; and a deer head, signifying the varied wildlife found in the state. The two crossed pine branches pine on the each side of the shield symbolize the sprigs worn by Vermont soldiers at the Battle of Plattsburgh during the War of 1812. Green mountains fill the background. A red banner contains the Vermont state motto: “Freedom and Liberty”. Vermont was the 4th state admitted to the Union. 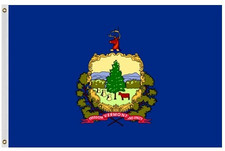 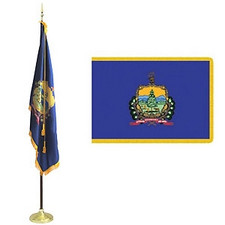 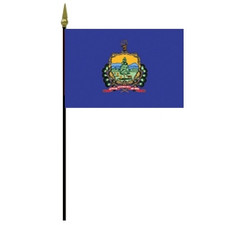 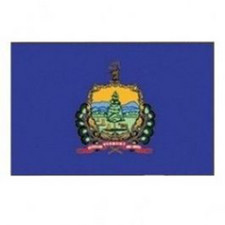