The American Samoa flag characterizes the cultural, political and regional meanings of the territory.  Red, white and blue reflect the traditional colors of the U.S. and Samoa.   The bald eagle clutching two Samoan symbols allude to America’s guardian ship over the territory.  The symbols the eagle clutches, a war club and a fue (fly-whisk), epitomize governmental power and traditional Samoan wisdom.

American Samoa is a territory of the United States located in the South Pacific Ocean, southeast of Samoa. The territory consists of five rugged, volcanic islands and two coral atolls (coral reefs).  It is slightly larger than the size of Washington D.C.  American Samoa is the southernmost territory of the U.S. and is one of just two US territories south of the Equator.  Most of the population is Samoan and speak both English and Samoan. 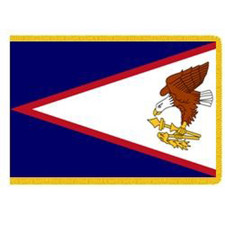