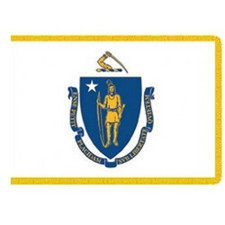 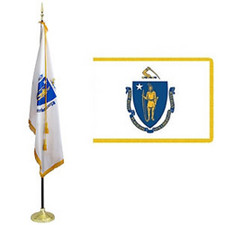 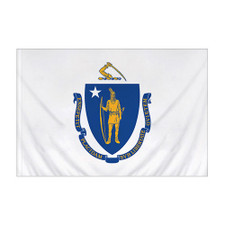 The Commonwealth of Massachusetts' flag has the state coat of arms on a white field on both sides. The Algonquian Native American on the shield is holding a bow and an arrow that is directed downward to indicate peace. Next to the figure's head, a white star with five points denotes Massachusetts as a U.S. state. The shield's motto, Ense Petit Placidam, Sub Libertate Quietem, is encircled by a blue ribbon ("By the Sword We Seek Peace, But Peace Only Under Liberty"). The state military crest—a bent arm holding a broadsword aloft—is displayed above the shield. The sword's blade is raised to symbolize how liberty was gained through the American Revolution. The sword itself is a replica of one that belonged to Myles Standish and represents the idea that it is preferable to live in tyranny than to lose one's right arm. Although the state flag had been used clandestinely as the ensign of the Massachusetts State Navy since the American Revolutionary War, it was only formally adopted in 1907. The new design took the place of the earlier pine tree in 1971.

Attempts to Change the State Flag

By October 1, 2021, the state flag and seal must be changed to "faithfully reflect and embody the historic and contemporary commitments of the Commonwealth to peace, justice, liberty, and equality as well as to spreading the opportunities and advantages of education." Governor Charlie Baker signed a bill creating the commission on January 11, 2021. The Massachusetts Senate already passed the measure on July 28, 2020. The Special Commission to Investigate the Features of the Commonwealth's Official Seal and Motto (Special Commission on the Massachusetts Flag and Seal) initially convened in July 2021. The Commission decided in April 2022 to seek the state legislature to extend the Commission's work deadline until 31 March 2023. The Commission suggested altering the seal, motto, and flag in May 2022.

Naval and Maritime Flags for Massachusetts

The Massachusetts State Navy adopted a white field with a green pine tree and the inscription "An Appeal to Heaven" as its flag (naval ensign) in April 1776. The flag was renamed "the naval and maritime flag of the Commonwealth" in 1971 when the slogan was dropped.

The Commonwealth of Massachusetts' flag features a white field with the State Coat of arms on each side. An Algonquian Native American with a bow and arrow is depicted on the shield; the arrow is pointed downward to indicate peace. The figure's head is accompanied by a white star with five points, representing Massachusetts as a U.S. state. The state motto, Ense Petit Placidam, Sub Libertate Quietem, is displayed on the shield, which is surrounded by a blue ribbon ("By the Sword We Seek Peace, But Peace Only Under Liberty").

A Native American with a bow and arrow can be seen on the coat of arms. Peace is represented by the downward-pointing arrow. A white star that represents the state being the sixth to be admitted to the United States is also included in the design. The state motto is written in Latin on a ribbon that is also part of the pattern.

When Nathan Cushing created the coat of arms for the nascent Commonwealth of Massachusetts in 1780, he brought back the image of the Indian from the seal from 1629. On a blue shield, an Indian is depicted in gold alongside a silver sovereignty star.

NAME: The Native American Massachuset tribe is the source of the state's name. Translations of the name include "at or about the Huge Hill," "great mountain place," and "giant hill site."

CAPITAL: Boston, which was founded in 1630, has served as Massachusetts' capital ever since. The city is the biggest in New England.

MOTTO:Ense Petit Placidam Sub Libertate Quietem. We seek peace by the sword, but freedom is the only condition for peace. The English patriot Algernon Sydney is credited with writing the phrase sometime around 1659.

STATE HEROINE:Deborah Samson, a state heroine who fought in the Revolutionary War by assuming a masculine identity

Song: “All Hail to Massachusetts,” by Arthur J. Marsh

Poem: “The Blue Hills of Massachusetts,” by Katherine E. Mullen

What do the words on the Massachusetts flag mean?

Ense Petit Placidam, Sub Libertate Quietem "By the Sword We Seek Peace, But Peace Only Under Liberty"

Who is the Indian on the Massachusetts state flag?

It is a blue shield bearing a Native American's likeness, Massachusett (the native people that inhabited the area which is now Greater Boston). He has an arrow and a bow in his possession.

Why is Massachusetts changing its flag?

The state motto and seal, which feature a Native American with a saber dangling above their head, were unanimously recommended for change by a Massachusetts special commission in May 2022.

The hand of English militia chief Myles Standish is depicted holding a saber over the head of a Native American as though he were about to strike the individual. In the 1600s, Standish raided numerous Native American towns. The seal is framed by the Latin phrase "Ense petit placidam beneath libertate quietem." "By the sword we seek peace, but peace only under liberty," roughly translates as the motto.

In January 2021, the Legislature passed S.2848, a bill that established a 19-member state commission to evaluate and suggest modifications to the state seal and motto, in response to decades of opposition by Native American activists and lawmakers.

Our Massachusetts Flags are Made in the USA!

We take great pride in providing Made in the USA American and Massachusetts state flags. You can directly support American independence, as well as ensure safer and more equitable working conditions, by purchasing products made in the United States. The list is endless!

What Massachusetts State Flags Do We Offer?

We are pleased to offer high-quality Massachusetts state flags. We have flags for outdoor use, indoor use and even Massachusetts Flag Sets!

Outdoor Massachusetts flags are both aesthetically pleasing and useful. In order for you to select the flag that is best suited for your area and weather circumstances, Carrot Top creates outdoor flags out of two unique, proprietary fabrics. Both flags feature vivid, strong colors that won't fade and are made of high-quality materials. The most adaptable state flags on the market are our Massachusetts outdoor flags. Both Patriarch® Polyester and Beacon® Nylon are used to make these flags. The extra-tough, lightweight nylon used to make Beacon® Nylon Massachusetts flags flies effortlessly in the air and dries rapidly. Beacon® flags are made for regions with gentler climates and less violent winds. These flags come in the following sizes: 12" x 18", 2" x 3," 3" x 5, 4," 5" x 8," 6" x 10," and 8" x 12." Massachusetts flags made with Patriarch® Polyester are made of incredibly durable, woven polyester that feels and looks like cotton. Flags from the Patriarch® line work best in windy and coastal environments.

Indoor Massachusetts flags are made of very durable, expertly woven nylon that is both lightweight and long-lasting. These flags are the most functional state flags available and are constructed with our proprietary Beacon® nylon. Beacon® flags feature vibrant, bold colors that won't fade and precisely reinforced stitching that resists fraying.

Our Massachusetts Flag Sets feature superb flag poles, carefully carved flags, and unique (pole) finishes. Choose what fits and functions best for you, whether you prefer the classic appearance of our Jointed Oak finishing pole or the adaptability of our unique Majestic Telescopic Pole.

We at Carrot-Top are extremely proud of our more than 40 years of grit and experience. Contact us today, and any of our Customer Care Associates will be delighted to assist you in placing an order right now for a Massachusetts state flag, an American flag, a flagpole, any of our customizable goods, or even one of our military flags! Please feel free to read also our in-depth flag buying guide.