The Kansas State flag vividly illustrates the history of “the Sunflower State” and conveys the determination of its residents. The Kansas flag consists of a blue background centered with the Great Seal of Kansas. A sunflower, torn from its stalk and resting on a twisted blue and gold bar, references that the state was carved from the territory acquired by The Louisiana Purchase. The torn sunflower is meant to indicate the fearlessness with which Kansas meets her problems and solves them. The Kansas State Seal pictures the hills of Fort Riley, Native Americans hunting buffalo, oxen drawing a wagon train, steamboats sailing and settlers plowing. The Kansas state motto translates to “To the Stars through Difficulties.” Thirty-four stars denote Kansas’ entry as the 34th state. 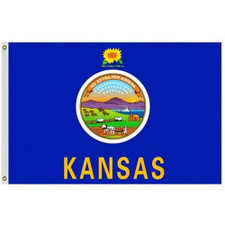 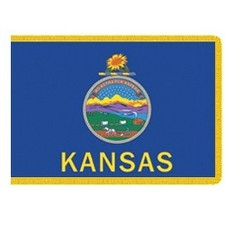 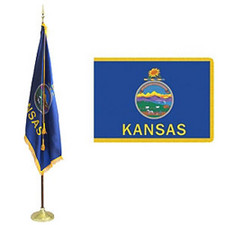 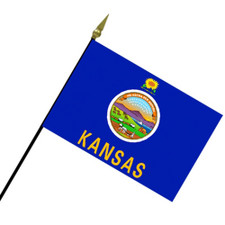 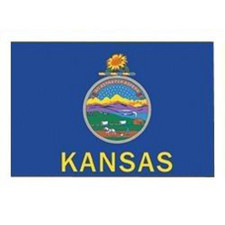 Hazel Avery, a seamstress in Lincoln, created and made the Kansas flag for a Fourth of July parade in 1925. It was approved in 1927, taking the place of a former state flag that had been turned down for display in the nation's capital. It wouldn't fly properly among other state flags because it was made to hang from a horizontal bar. Later, "Kansas" was added beneath the state seal on Avery's flag. On September 24, 1961, the current version was formally adopted.

The state banner is a recognized alternative to the state flag that is still used today. The banner, which depicts a lone sunflower on a blue field, is shown on the organization's website, which credits Adjutant General Joe Nickell with creating it. However, the Kansas State Historical Society does not identify its status as an alternate flag; rather, it describes the same design as one that Albert T. Reid submitted before the state flag was chosen.

The history of Kansas is told through the state seal, which is in the center of the flag, and by the individuals it depicts. The state motto of Kansas is "Ad Astra per Aspera" (Latin: "To the Stars through Difficulties"). The seal features a landscape with a rising sun (the east), a river and steamboat (commerce), a settler's cabin and a man plowing a field (agriculture), a wagon train heading west (American expansion), Indians hunting American Bison (the buffalo are fleeing from the Indians), a cluster of 34 stars (top of (above the stars).

Kansas is the 34th state to be admitted to the Union of the United States, as shown by the thirty-four stars grouped at the top of the seal. According to Kansas state law, the flag must always be flown when the state is duly represented.

What Does the Kansas Flag Symbolize?

There are numerous emblems of pioneer life on this flag. The rising sun, which stands for the east, a river and steamer that signify trade, and a cottage with a man plowing a field all serve as symbols.

- KANSAS IS THE HOME OF THE REAL WINDY CITY

Despite not being THE Windy City, Dodge City, Kansas, does have an average wind speed of 14 miles per hour. In reality, it is the windiest city in the entire country.

In Hutchinson, there is a place called the First United Methodist Church. The foundation has a number of grasshoppers because it was built during the grasshopper plague.

- IT PLAYED A MAJOR ROLE IN THE CIVIL WAR

Here, more people died in the Civil War than in any other state in the Union.

Fort Riley provided safety for travelers on the Santa Fe and Oregon Trails.

- KANSAS GOT ITS NAME FROM NATIVE AMERICANS

A Native American tribe whose name means "people of the wind" is thought to be the inspiration for the name Kansas.

- THE OFFICIAL STATE BUG IS…

- AND THE OFFICIAL STATE REPTILE IS….

The ornate box turtle! (Yes, we are just as shocked as you are that Kansas has a state reptile.)

The first hamburger chain to open in the US was called White Castle, and it was founded in Wichita, Kansas. Surprisingly, the entire state currently lacks a single White Castle restaurant.

FAQ About Kansas Flags and the State of Kansas

Why does the Kansas flag have mountains?

Yes, Mount Oread, where the University of Kansas is located, is a well-known hill in Kansas. The Sunflower State, or "that region you have to drive through on your way to Denver," is flatter than a pancake, according to a study released in 2003 by three geographers. How level is it? Kansas edges out flapjacks, which have a flatness.957 if 1.0 symbolizes ideal flatness. So why do mountains, a buffalo, and a farmer appear in the state seal's background along with them? The cause most likely stems from the Kansas Territory's original boundaries, which extended far into what is now Colorado and included the Rocky Mountains. Perhaps the mountainous hills on the seal were influenced by the Rocky Mountains, according to the state's official description. The state is flat; science does not lie. We, therefore, have a tendency to accept this theory.

What is the Kansas motto?

Ad astra per aspera translates as "to the stars via adversity." This is a representation of the difficulties Kansas had to deal with, including slavery, Indian raids, and the impending war.

Is Kansas famous for anything?

Kansas is renowned for its huge grasslands, undulating hills, and unspoiled landscape. The state is home to the biggest contiguous tallgrass prairie in the world and contains one of the most river miles of any state in the Great Plains.

Our Kansas Flags are Made in the USA

We are proud to offer Kansas flags and American flags that are all Made in the USA! By supporting American-made goods, you are directly promoting American independence and supporting guaranteed safer and fair working conditions, among many other things. The list goes on and on!

What Kansas Flags Do We Offer?

Our proprietary Beacon® nylon is used to create indoor Kansas flags. Your flag will wave in the breeze with ease thanks to this incredibly robust, lightweight nylon. Beautiful, vibrant colors that are resistant to fading and stronger stitching to avoid fraying are featured on these adaptable flags. We offer impressive and lovely displays of the Kansas State flag with our indoor flags. All indoor flags have three sides of plush conventional gold fringe and a lined pole sleeve on the left.

Outdoor Kansas flags are made of both Patriarch® polyester and Beacon® nylon to ensure that you get the correct flag for your surroundings. Both textiles are made with the best components and craftsmanship and are exclusive to Carrot Top brands. With outdoor Kansas flags, you can proudly display your love for the state in public. Our Beacon® nylon Kansas flag is constructed from very strong, long-lasting nylon that is nonetheless thin and flexible. Beacon® flags are available in sizes 12" x 18", 2'x 3', 3'x 5', 4'x 6', 5'x 8', 6'x 10', and 8'x12 and are designed to withstand the environmental challenges of mild climates with moderate winds. Extreme weather conditions and strong winds are no match for the Patriarch® polyester Kansas flag. These flags come in 3'x5', 4'x6', and 5'x8' sizes.

The best flag sets that can be found are our Kansas flag sets. You can match your current style or create a completely new one by selecting the ideal flag size, flagpole, and pole finish from Carrot Top. Two sizes of Kansas flags are offered, and they can be used with one of our specialized Majestic Telescopic Poles or our Jointed Oak finish pole. Kansas Flag Sets produce lovely indoor flag presentations for your house, workplace, or business, as well as fantastic parade presentations.

Let us Assist You Today!

At Carrot-Top, we take great pride in having more than 40 years of grit and expertise behind us. Any of our Customer Care Representatives would be happy to help you place an order for a Kansas state flag, an American flag, a flagpole, any of our customized items, or even one of our military flags right now! Contact us right away! Please feel free to read our comprehensive buying guide for as well.