The New York State flag celebrates the spirit and freedom of the American Revolution while it also honors the industry and commerce of the Empire State. The New York flag consists of the state’s Coat of Arms centered on a blue field. The New York Coat of Arms displays a shield depicting the sun rising on a cloudless sky behind three mountains. A three-masted ship and a sloop sail on the Hudson River. The shield has two supporters, Liberty and Justice. Liberty’s foot treads upon a crown and signifies freedom from the British Monarchy. A blindfolded Justice stands opposite Liberty and symbolizes the impartiality needed to distribute both punishment and reward when required. Beneath the shield, a banner proclaims the New York state motto: “Excelsior”, which means to reach for a higher life. 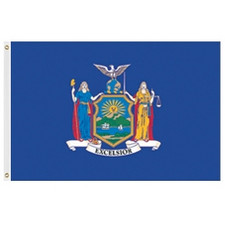 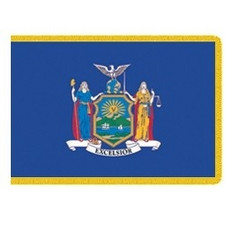 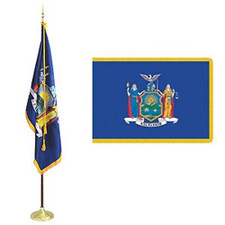 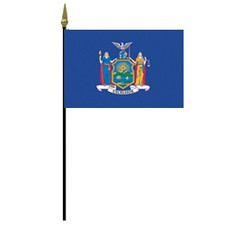 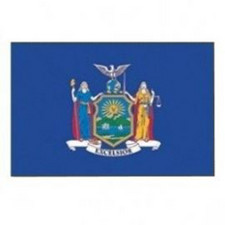 The state flag's coat of arms was first established in 1778 and has undergone minor revisions over time. The current flag is a modernized version of a flag from the Revolutionary War. The Albany Institute of History & Art houses the original.

The flag was initially established in 1896; on April 2, 1901, a statute was passed by the assembly that altered the flag's buff field to blue.

The 72 state, territorial, and provincial flags of the United States as well as those of Canada were the subject of a 2001 assessment by the North American Vexillological Association. Following the completion of the survey, NAVA members selected the flag of New York to be placed 53rd out of the possible 72.

The 2021 State Budget was passed in April 2020, and as a result, the coat of arms was changed to add "E Pluribus Unum" as a supplementary motto beneath "Excelsior." The state flag and seal have both been altered to reflect the change.

The goddess Liberty is shown on the flag, holding a pole with a Liberty Cap on top. Liberty is a symbol of freedom. A broken crown, symbolizing the liberation from England at the conclusion of the Revolutionary War, lies at her feet.

The goddess of justice is to the right of the flag. She carries the scales of justice and is blindfolded. indicating that everyone is treated equally by the law. On a white ribbon at the bottom of the flag, the motto of New York, "Excelsior," conveys the concept of striving for greater ideals. Over the Hudson highlands and the Hudson River, a sun rises on the shield. An eagle perched on a globe that represents the Western Hemisphere is depicted above the shield.

Adoption of Coat of Arms

The state's coat of arms, which is displayed in the center of the flag, was adopted by the state legislature in 1778.

Two Supporters in the Coat of Arms

A sloop and a masted ship are depicted on the Hudson River in the coat of arms. The Sun rising behind the three mountain ranges is also shown. The shield is backed by Justice and Liberty. The Phrygian cap of the left supporter is raised on a pole. A crown that symbolizes independence from the British monarchy, which formerly ruled New York as a colony, is crushed by her left foot. The blindfolded supporter on the right stands in for justice. It also stands for fairness and is carrying a pair of scales in one hand and a sword in the other.

A ribbon with the state's motto, "Excelsior," printed in Latin beneath the coat of arms reads, "Excelsior" means Ever Upward.

Earlier Flag of the State

The state used a buff-colored flag with the same coat of arms from 1896 until April 2, 1901, but a different background color (pale orange-brown).

Does New York have two flags?

New York has its own single official flag, and it also has a separate flag to represent each of the five boroughs.

What is the nickname of New York State?

George Washington is frequently credited with giving New York its moniker. The previous highest skyscraper in the world is named after the "Empire State," which is also displayed on New York's car license plates. However, the history of the nickname for the state is largely unknown.

Why is NYC called Big Apple?

It all started in the 1920s when sportswriter John J. Fitz Gerald penned a column about the numerous horse races and racetracks in and around New York for the New York Morning Telegraph. He called the enormous prizes up for grabs "the big apple," signifying the biggest and best one can accomplish.

The City That Never Sleeps

Our Flags are Proudly Made in the USA!

What New York Flags Do We Offer?

We are proud to offer a variety of New York flags for indoor use, outdoor use, and flag sets!

Indoor New York flags are made from the best materials and have vibrant, deep colors. These flags have excellent, reinforced lock stitching and are expertly crafted from our proprietary Beacon® nylon. Indoor flags are offered in a range of sizes to suit your flagpole and display requirements.

With the help of our Outdoor New York flags, you can design vibrant outdoor displays that celebrate our love and passion for the state of New York. These flags are made from two materials and come in a variety of sizes. Outdoor flags include vivid, rich colors that won't fade and stronger stitching to keep them from fraying.

Our New York Flag Sets combine our exquisite flags with classy flagpoles. You have the choice to design a look with Carrot Top that best suits your taste and the available space. Flag Sets come with the flag, flag pole, and (pole) finishes of your choosing. Magnificent indoor displays are created by our flags and flagpoles.

Pair Your New York Flag With an American Flag!

Use our exclusive Beacon® Nylon American Flags or our special Patriarch® Polyester American Flags to fly your New York State flag! This combination will definitely improve curb appeal and demonstrate your support for both your state and the USA. See the entire collection of American flags right here!

Let us Assist You Today!

Here at Carrot-Top, we are proud to be backed by over forty years of hard work and experience. Any of our Customer Care Representatives would be grateful to assist you today in placing an order for a New York state flag, an American flag, a flagpole, any number of our custom products, or even any of our Military flags! Contact us today! Additionally, feel free to review our complete state flags buying guide.