The California flag proudly illustrates the state’s independence and strength. The Bear Flag, first raised in 1846 by a group of American settlers in revolt against Mexican rule, was designed by William Todd, nephew of Mary Todd Lincoln. Our indoor and outdoor California flags come in a variety of sizes—from mini to extra-large—in our exclusive nylon and polyester fabrics. Click on an image below to learn more about each flag or scroll down to keep reading about our catalog of California flags. 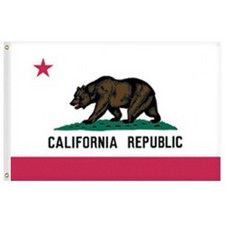 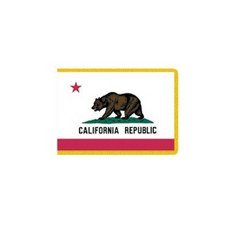 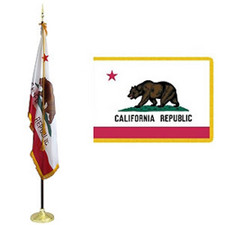 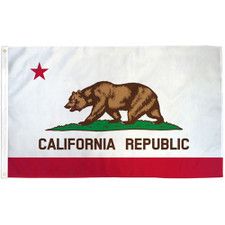 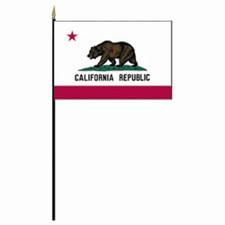 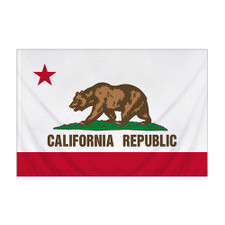 Background of the California Flag

The famous bear flag, created by William Todd (the nephew of Mary Todd Lincoln, Abraham Lincoln's wife), was flown at Sonoma, California in 1846 by American immigrants in opposition to Mexican sovereignty (officially adopted as the state flag of California in 1911).

The once-common California grizzly bear, which is also the state animal, symbolizes strength, while the star, the red stripe, the word "courage," and the white background indicate purity.

A small group of settlers attacked the Mexican garrison at Sonoma on June 14, 1846 and captured the commandant. They published a proclamation in which they proclaimed Mexico's independence from California as a Republic.

The hurriedly created flag, which featured a grizzly bear and a five-pointed star over a red bar and the words "California Republic," gave rise to the nickname "Bear Flag Revolt" for this insurrection.

The star was a nod to the Lone Star of Texas, and the grizzly bear was a representation of enormous strength. Only until July 9, 1846, when it became known that Mexico and the United States were already at war, did the flag fly. The American flag quickly took the place of the Bear Flag. In 1911, the State Legislature designated it as the State Flag.

Fun Facts About the California Flag

The California flag is known as “the Bear Flag”

The bear’s name is Monarch

The red star was inspired by the Texas state flag

The California flag is ranked #13

Is the governor’s flag similar to the state flag?

FAQ About the California Flag

How old is the California Republic flag?

Why does the California state flag say “CALIFORNIA REPUBLIC”?

The ideal flag for inside events such as parades, courtrooms, courts, and schools is the indoor California flag. These flags are made of Beacon® nylon, a material only available from Carrot-Top. These flags include complex lock stitching to avoid fraying, brilliant bright colors, and nylon that is tightly woven and durable. Our indoor California flags are finished with plush conventional gold fringe on the other two sides and a lined pole sleeve along the left side. There are two sizes of these flags: 3'x 5' and 4'x 6'. The 8' indoor/parade flagpole or our proprietary Majestic Telescopic flagpole works well with the 3'x5' Indoor flag. The 9' indoor/parade flagpole and one of our Majestic Telescopic Flagpoles work well with the 4'x6' Indoor flag. These flags are always proudly Made in the USA.

You'll have plenty of chances to show off your admiration for the wonderful state of California with our Outdoor California state flag. These outdoor flags come in two different sizes and two distinct fabrics. California Outdoor flags are offered in Patriarch® polyester and Beacon® nylon. To fit your area and the weather, pick the right flag and size. Our California state flags have fine lock stitching, brilliant, vibrant colors, and the best materials available. These flags are made of Patriarch® polyester and Beacon® nylon. Both fabrics are Carrot Top exclusives.

Your decorative requirements will be perfectly met by our California Flag Sets. The Flag Sets from Carrot Top come with a wide range of possibilities, giving you the freedom to create the desired appearance. Choose the finishes and flag size that you require from our collection. These Flag sets are the ideal way to demonstrate your admiration for the wonderful state of California, whether for parades or an inside display. With our flag sets, you're in control of creating the style you want.

Our Carrot-Top Customer Care Team is eager to assist you with your order today. Contact Us Today with any questions you may have regarding California flags or our American flags, all proudly made in America!