The state flag of Illinois respectfully promotes the nation's unity while simultaneously expressing the independence of the "Land of Lincoln." The Illinois State Seal is displayed in a white field on the state flag of Illinois. The Great Seal of the United States and the years of statehood (1818) and the Seal's redesign (1868) are both represented by symbols on the shield. The state motto of Illinois, "State Sovereignty, National Union," is held in the claws of an eagle. Despite continuing to demand its own sovereignty, Illinois continued to support the Union during the Civil War. As a result, the term "sovereign" is reversed. Because it has a large metropolitan area, minor industrial cities, extensive agricultural fields, and regions with an abundance of natural resources, Illinois is frequently referred to be a miniature version of America. 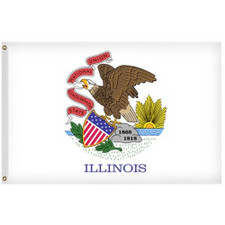 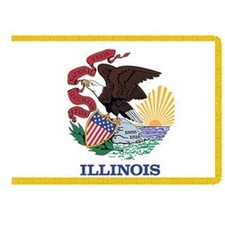 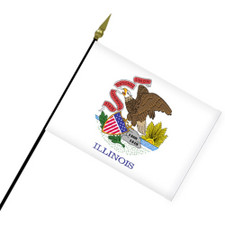 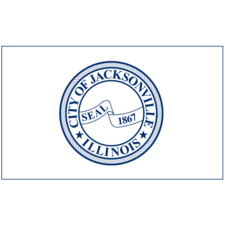 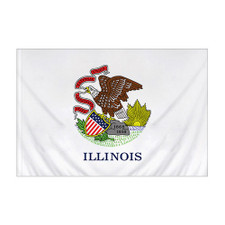 Brief Background of the Illinois Flag

Complete History of the Illinois Flag

The Daughters of the American Revolution (DAR) state regent Ella Park Lawrence launched a campaign in 1912 to have Illinois adopt a state flag.  Although she was unsuccessful in her efforts to get the Illinois General Assembly to approve a state flag during her tenure as state regent, she persisted in doing so as a DAR member from the Rockford chapter. On April 1, 1914, Lawrence issued a letter to every DAR chapter in Illinois proposing a competition to create the state flag of Illinois, with a $25 award for the winner. In response to this contest, 35 designs were submitted. Lewis Stevenson, the secretary of state for Illinois, served as the panel's chair. They decided to go with Lucy Derwent's concept. On July 6, 1915, the flag was formally adopted as the state's flag by the Illinois State House and Senate. The law was not signed by Governor Edward F. Dunne, but he also did not veto it.

Chief Petty Officer Bruce McDaniel filed a petition in the 1960s to have the state name added to the flag. He mentioned that many of the soldiers he served alongside in the Vietnam War were unfamiliar with the banner. On September 17, 1969, Governor Richard B. Ogilvie authorized the addition to the flag, and on July 1, 1970, the new flag, created by Mrs. Sanford (Florence) Hutchinson, became legally recognized.

The Great Seal of Illinois, which was modeled after the Great Seal of the United States and was created in 1819, is shown on the current flag. State Sovereignty, National Union is written on a flag in the eagle's beak. The years 1818 and 1868 on the seal stand for the years Illinois became a state and the year Sharon Tyndale redesigned the Great Seal. Despite being the first phrase in the motto, "State Sovereignty," "State" is at the bottom and "Sovereignty" is upside-down.

Wallace Rice, who also created the flag for Chicago, created a centenary banner for Illinois in 1918 to commemorate the state's 100 years of independence. It had three equal-width horizontal bars that alternated between white, blue, and white. Along the hoist's edge, 21 stars were charged onto it. When Illinois became a state in 1818, there were 10 blue stars in the upper white band and 10 in the lower white band, signifying the 10 northern and 10 southern states. One sizable white star, representing the state of Illinois itself, was on the central blue band.

In advance of the state's bicentennial the following year, on January 12, 2017, the state presented a logo. The word ILLINOIS is positioned over a blue outline of the state in Ben Olsen's logo. The number 200 is displayed in a sunburst effect in the middle of the silhouette. The words "Bicentennial" are also in gold along the right side, running from bottom to top. Below those words are the dates 1818 and 2018. All of this is surrounded by 21 gold stars, which represent Illinois' position as the 21st state. Stewart Layne, the Bicentennial Office's executive director, added “The sunburst in the middle of the state outline portrays the impact Illinois has made on the country and the world over the past two centuries and the bright future we aspire to for the next 200 years."

History of the State Seal Seen on the Illinois State Flag

The first Illinois General Assembly authorized the use of the state's first great seal in 1819. The Secretary of State of Illinois was mandated to acquire and maintain the Great Seal by the first law that authorized it. The first engraved seal was essentially a replica of the American national crest, the Great Seal. Up until 1839, when it was recut, it was in use. The 1839-created symbol was used as the Second Great Seal.

The initiative to design a third state seal for Illinois was led by Illinois Secretary of State Sharon Tyndale. He urged that the state motto be changed from "State Sovereignty, National Union" to "National Union, State Sovereignty" and asked State Senator Allen C. Fuller to introduce legislation mandating a new seal in 1867. On March 7, 1867, the legislature enacted a measure, although it retained the original language. The legislature rejected his suggestion, but nonetheless charged Tyndale with creating the new seal. And Tyndale was able to (literally) twist the legislative purpose; he retained the phrases on the banner in the right order, but the banner twists and the word "Sovereignty" is on the back, which may make it harder to read.

The bald eagle is perched on a rock holding a shield in its talons and a banner with the state motto in its beak on Tyndale's seal. The shield's thirteen stars and thirteen stripes stand in for the Union's first thirteen states. The year of statehood, 1818, is displayed on the seal beneath 1868, the year the current seal was adopted, along with the date August 26, 1818, when Illinois' first constitution was adopted in Kaskaskia. Since it was initially created, this fundamental design has endured through a number of modest alterations. The Great Seal of the State of Illinois is still kept by the Illinois Secretary of State.

Facts About the Illinois Flag

FAQ About the Illinois Flag

Who made the Illinois flag?

What are the words on the Illinois flag?

What Kinds of Illinois State Flags does Carrot-Top Offer?

You may proudly fly your state pride with an outdoor Illinois flag. Illinois flags manufactured of Outdoor Beacon® nylon are unusually thick, strong, and light enough to fly in the smallest wind. These flags were created for environments with mild temperatures and gentle winds. Illinois flags made with Patriarch® polyester are made of incredibly durable, woven polyester and are made to withstand inclement weather and strong winds. Both of these fabrics for the Illinois flag are offered in a wide range of sizes.

The finest materials are used in the creation of mini Illinois flags, which have vibrant, vivid colors and superb stitching. You can display your admiration for the wonderful state of Illinois at a variety of events by using these small flags. Mini flags are also fantastic gifts and giveaways, and they are reasonably priced to give to family, friends, neighbors, coworkers, and students.

Our Illinois State Flags are Made in the USA

Our Illinois state flags are all proudly made in the USA with the highest quality and standards of craftsmanship. These flags are something you can be proud to put on display.

Pair your Illinois state fag with an American flag, also proudly made in America.

Over 40 years of expertise and experience can be found at Carrot-Top Industries. Please know that we are here to help you when you are ready to place an order. You can contact our team or place an online order.