With more than 40 years of expertise in the flag business, we have the knowledge and skills to meet all of your state and American flag requirements. Our premium nylon and polyester materials are used to create our South Carolina Flags, which are backed by the Industry’s Best Six-Month warranty against defects, fading, or ripping. These flags are moreover proudly made in the United States of America.

The South Carolina flag is a representation of the U.S. state of South Carolina and has a white palm tree and crescent on a blue background. This design's origins date back to 1775 and are based on one of the early Revolutionary War banners. Since its acceptance, it has changed a little bit while retaining the majority of its original design. 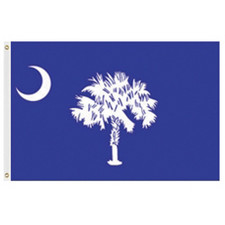 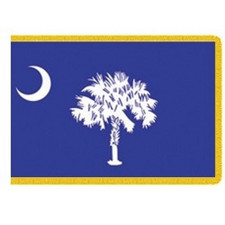 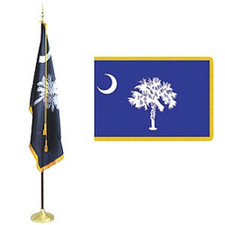 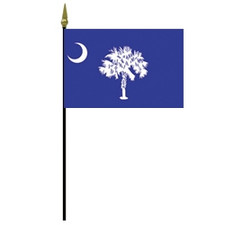 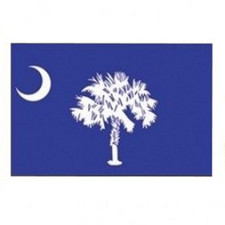 The Revolutionary Council of Safety commissioned Colonel William Moultrie in 1775 to create a flag for the South Carolina soldiers to use during the American Revolutionary War. The crescent from the militia's hat symbol was combined with the blue of their uniforms in Moultrie's design. At Fort Johnson, it was first flown.

This flag was infamously flown when Moultrie engaged a British fleet that had not suffered a defeat in a century while defending a new fortification on Sullivan's Island. The flag was shot down during the 16-hour struggle on June 28, 1776, but Sergeant William Jasper raced into the open, raising it and inspiring the troops until it could be mounted once more. Since this act of heroism prevented Charleston from being conquered for four years, the flag became the state's and the new country's emblem of the Revolution and freedom.

When Charleston was liberated at the close of the war, Major General Nathanael Greene presented the South Carolinian militia with the flag, which quickly gained notoriety as the Liberty Flag or Moultrie Flag. It was the first American flag to flutter over the South, according to Greene.

A nod to Moultrie's fortification of Sullivan's Island, the palmetto was installed in 1861. The fortress Moultrie had built had lasted in large part because the palmettos, planted over sand walls, were able to withstand British cannon.

The first official proposal for a flag, which was a white ensign with a green palmetto and a blue canton with a white increscent, was finalized on January 21 for the newly independent state of South Carolina after it announced its intention to secede from the Union. After deliberating for a week, they chose to adapt an already-used unofficial state flag with an upward-facing crescent on a blue background with a palmetto in the middle. The South Carolina General Assembly authorized a new flag on January 26, 1861, adding a golden palmetto surrounded by a white background. Because the golden palmetto was replaced with a plain white palmetto on a blue backdrop on January 28 after two days, this flag has earned the moniker "2-day flag." A variation of the palmetto flag was the first of the Confederate States of America's flags to replace the Stars and Stripes of the United States of America, from which the Confederacy had seceded, less than three months later, on April 14, 1861, the day the fort was occupied by the Confederate Army. The flag, sometimes known as "The Palmetto Guard Flag," had a palmetto on a solid white backdrop with a red star in the upper left corner.

Although South Carolina never recognized the Sovereignty flag as its official flag, there are allegations that it was flown there for a brief period of time following the state's separation on December 20, 1860. Another noteworthy flag is the "South Carolina Secession Flag," which was flown over the Charleston Custom House on the day South Carolina declared its independence. It is a crimson flag with two tails, a big white star, and a downward-facing crescent at the top by the flagstaff. As a representation of secession, it later spread to other cities.

A similar flag was flown at Morris Island at the start of the American Civil War as cadets from The Citadel opened fire on American supply ships.

Origin of the Crescent

The council of safety asked me to have one made because the state troops were dressed in blue and the fort was manned by the first and second regiments, who wore a silver crescent on the front of their caps. I had a large blue flag made as a result. William Moultrie writes in his memoirs: "A little while after we were in possession of Fort Johnson, it was thought necessary to have a flag for the purpose of signals.

The crescent was positioned vertically in Moultrie's initial drawing, with the aperture pointing above. The crescent with upward-pointing cusps is also depicted on the flag of the 1860s. However, in 1910, Alexander Samuel Salley Jr., secretary of the state's Historical Commission, tilted the crescent to its present position for reasons he did not record.

State law has not specified "the shape, size, design or location" of the symbols or the precise color of the backdrop since 1940, despite the fact that the flag always features a white palmetto and crescent pattern on a blue background. As a result, flags made by various producers may look different. In January 2018, a committee of the South Carolina Senate heard testimony on the subject, but no legislation to standardize the design was immediately advanced.

A uniform design was unveiled in 2020, but the public reacted negatively to it right away because they thought it was ugly. Then, two further designs were suggested, one of which was chosen to serve as the official standardized version.

What is the state of South Carolina known for?

Historic areas, golf courses, and beaches are all popular features of South Carolina. In terms of population and size, it comes in at number 23. Charleston, Myrtle Beach, Columbia, Greenville, Spartanburg, and Florence are its most important cities.

What was South Carolina called before it became a state?

Is moving to South Carolina a good idea?

Moving to South Carolina is a good chance to experience the laid-back Southern way of life and discover a diversified state with a fascinating history, delectable cuisine, and breathtaking beauty. It is a desirable place to live and maybe retire due to its affordable housing costs and property taxes.

Our South Carolina Flags are Made in the USA!

We are proud to offer American and South Carolina State flags that are both Made in the USA! By purchasing American-made goods, you can be sure that the products you get uphold our high-quality standards.

What South Carolina State Flags do we Offer?

Outdoor South Carolina flagsare made from two of our unique fabrics, have stronger lock stitching, and come in stunning, eye-catching colors. These flags produce vibrant displays that elegantly and eloquently demonstrate your devotion to the Palmetto state. Both Beacon® Nylon and Patriarch® Polyester are used in the design of outdoor South Carolina flags. South Carolina flags made of Outdoor Beacon® Nylon are made of sturdy, resilient, and lightweight nylon that dries quickly and flies wonderfully in the smallest breeze. These flags are offered in the following sizes: 12" x 18", 2'x 3', 3'x 5', 4'x 6', 5'x 8', 6'x 10', and 8'x 12. They are designed for areas with moderate to gentle winds. South Carolina flags made of Patriarch® Polyester are constructed from thick, two-ply polyester that feels and feels like cotton. These flags come in the following sizes and can endure strong winds and the elements: 4'x6', 5'x8', and 3'x5'. Both flags contain two brass grommets for quick attachment to your flagpole and a lined pole sleeve.

South Carolina Flag Setscombine our lovely flags with regal flagpoles. You can select the flag size, flag pole, and pole finish type from our flag sets to best fit your preferences and display/parade requirements. With our South Carolina Flag sets, you may create the kind of display that complements your room the best. The 3' x 5' and 4' x 6' South Carolina flags are the two sizes that are offered. Together with our unique Majestic® telescoping Pole, both flags are ideal. Majestic® Poles are among our most adaptable flagpoles since they are quick to modify, portable, and simple to put together. Three different pole finishes are available for Majestic® Poles: Gold, Chrome, and Wood Grained. A two-piece, hardwood pole with an oak finish is called the Jointed Oak finish Pole. This flagpole has a much more conventional appearance and has brass joints. The 8' Jointed Oak Pole is ideal for displaying the 3' x 5' South Carolina flag, while the 9' Jointed Oak Pole is also ideal for displaying the 4' x 6' South Carolina flag. The pole diameter of both Carrot-Top flagpoles tapers from 1 14" at the bottom to 7/8" at the top. This makes it possible to use any decoration without a converter. Each Carrot-Top flag set comes with a weighted base, a decorative eagle or spear, and a gold string with tassel.

Here at Carrot-Top Industries, we are quite proud of our perseverance and knowledge, which go back more than 40 years. We rely on our extensive knowledge to make sure that customers like you receive the greatest, most accurate information available. Fill out our Contact Us Form today! Any of our customer service representatives will be delighted to assist you in placing an order for anIowa state flag, an American flag made in America, a flagpole, any of our customized products, or even one of our military flags! To ensure that you get the correct flag, please read our comprehensive buying guide for state and national flags. If you have any questions, get in touch with us straight away!