Carrot-Top has a great selection of Maryland flags for a variety of purposes. We are backed by over forty years of expertise in the flag industry. Let us assist you today in purchasing a Maryland flag that is perfect for your needs! Furthermore, feel free to explore complete detail about the background and significance of the Maryland Flag underneath the products. 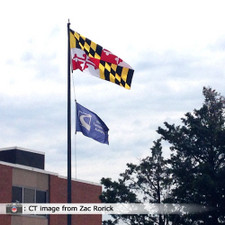 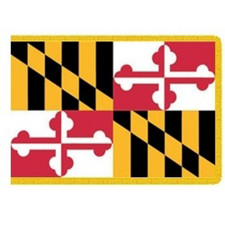 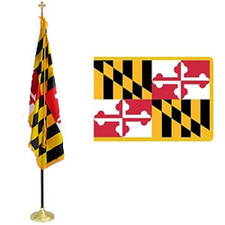 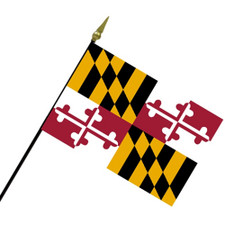 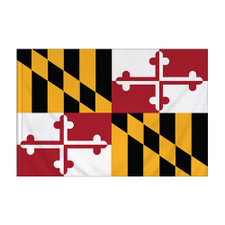 Background of the Maryland Flag

The 2nd Baron Baltimore (1605–1675) formed the Maryland colony, which King Charles I had given to him as the son and heir of the first Baron Baltimore; thus, the use of his banner of arms as the flag. Only the gold (yellow) and black Calvert arms were connected to Maryland throughout the colonial era. Following American independence, the state ceased using the colors, but they were reinstated in 1854.

During the American Civil War, the red and white cross button counterchanged became more well-known. Even though a sizable segment of the population supported the Confederacy, Maryland had remained a staunch friend of the United States, particularly in the state's capital city of Baltimore, the counties in its southern region, and the Eastern Shore of the Chesapeake Bay. Many of the Marylanders who fought for the Confederacy in Robert E. Lee's Army of Northern Virginia adopted the Crossland banner, often known as "secession colors," and frequently wore a metal button cross affixed to their gray uniforms or caps (kepis). The Barons Baltimore's black and gold bend dexter counterchanged was used in the flags, devices, and pins worn by Union Army regiments in the Army of the Potomac. Marylanders who had served in the military on both sides of the conflict later returned to their home state in need of reconciliation.

After the Civil War, the current design—which contains both of George Calvert's coats of arms—began to make an official appearance. At a parade commemorating Baltimore's 150th anniversary on October 11, 1880, the flag was flown for the first time in its current configuration (1729–1730). On October 25, 1888, it was flown once more at the Gettysburg Battlefield during ceremonies where reorganized regiments of the former state militia, now the Maryland National Guard, dedicated monuments to the Maryland regiments of the Army of the Potomac.

It wasn't until 1904 that the flag was formally designated as the state flag. The current flag, which is reflected by its colors, is a representation of the state's residents coming together.

Following independence and the termination of the Calvert flag, Maryland was represented by numerous banners. By the Civil War, the Maryland seal on a blue background was the most popular representation of the entire state of Maryland. It is important to note that the Maryland seal before 1876 did not feature the current Maryland flag. These banners had a variety of designs and were not official. The precise details of these flags are unknown.

The current flag is a quartered field with the arms of Alicia Crossland in the upper fly and lower hoist and those of the 1st Baron Baltimore in the canton (1st quarter) and lower fly (4th quarter) of the banner of arms of the Barons of Baltimore (2nd and 3rd quarters).

The 1st Baron Baltimore, a former secretary of state, had his arms handed to him as compensation for storming a citadel during a battle, and they are displayed in the black and gold quarters of the flag. (The vertical bars resemble the palisade's bars.) The red and white quarter is the coat of arms of the Crossland family, from South Crosland in West Yorkshire, England, the family of Lord Baltimore's mother. It consists of a cross with red and white sides that alternate. Lord Baltimore was allowed to use both arms in his coat of arms because his mother was a heraldic heiress. After George, Lord Baltimore, died in April 1632, his eldest son Cecil, 2nd Baron Baltimore, to whom the Province of Maryland was handed that year, received the right to carry the arms and banner.

Quarterly, first and fourth, paly of six Or and Sable, a bend counterchanged (for Calvert); second and third, quarterly, argent and gules, a cross bottony counterchanged are the heraldic blazons (for Crossland).

Interesting Facts About the Maryland Flag

FAQ About the State of Maryland

What is the state of Maryland famous for?

The state of Maryland is well-known for its fishing, and it also produces the most blue crabs nationwide. Limestone, coal, clay, and natural gas are also mined in the state.

Why is Maryland called the “Free State”?

On November 1, 1864, Maryland became officially acknowledged as a "Free State." The Maryland Constitution of 1864 went into effect on that day. By virtue of its provisions, slavery was outlawed inside the State's boundaries, and Maryland formally became a free state.

Is Maryland its own state?

Yes. Maryland is one of the 50 states that make up the USA. It is one of the original 13 states and is located in the middle of the Eastern Seaboard's vast commercial and populated area, which stretches from Maine to Virginia.

What Maryland Flags do we Offer?

We offer a variety of Maryland flags for indoor use, outdoor use, Maryland Flag Sets and Mini Maryland state flags, so you can be sure to show your love for the “Free State” anywhere!

Indoor Maryland flags are the ideal method to proudly, formally, and respectably display your love of the state of Maryland. These flags are the most functional indoor state flags available and are made of our unique Beacon® Nylon. The detailed, reinforced stitching on Beacon® Maryland flags resists fraying, and the vibrant, vivid colors are fade resistant.

Our Maryland Flag Sets take into account both your display needs and sense of fashion. You can choose the flag size, flagpole, and (pole) finish for these flag sets, among other possibilities. With a Maryland flag set assembled especially for your room, you may coordinate with the decor you already have or create a completely new design.

If you need assistance buying a state flag for your organization, please read our comprehensive flag buying guide to help you make the best decision. In addition, please feel free to contact us today for assistance with your order! We have over forty years in the flag and flagpole business. Our customer care representatives are eager to assist you and ensure that you are getting a great, American-made product every time with our Maryland flags or our American flags!