Carrot-Top Industries is pleased to have more than 40 years of experience and knowledge in the flag business to support them. We are proud that our Louisiana Flag is made in the U.S.A and backed with a 6-month guarantee against defects and tearing.

The Louisiana State Flag graphically represents the state's responsibility to safeguard the citizens and lands of "the Pelican State." Since colonial times, pelicans have served as symbols of Louisiana. Three blood specks on the mother's breast convey the idea of self-sacrifice on the part of the state to care for its people. The blood also alludes to Christ's death as an atonement for humankind's sins. Below the family of pelicans, a ribbon bears the words "Union, Justice, and Confidence," which are the state motto of Louisiana. Purchase a Louisiana state flag today! 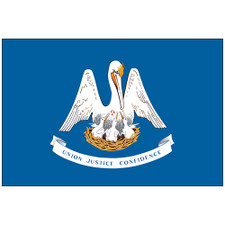 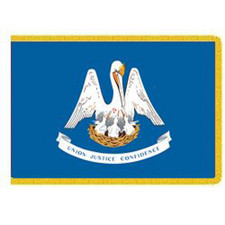 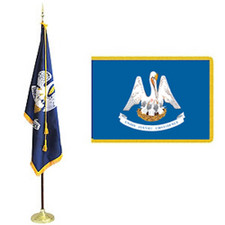 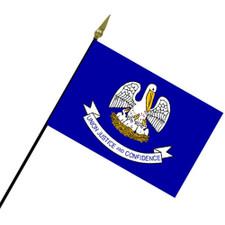 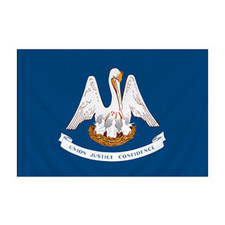 Background of the Louisiana Flag

The brown pelican made its first appearance in Louisiana in 1812 on the state seal, numerous militia company colors, and uniform buttons. The State Legislature approved the flag's design on July 1, 1912, the 100th anniversary of the state's birth. It shows a pelican vulning herself. The state's current flag has undergone two modifications (on May 25, 2006, and November 22, 2010).

The First Flag of Louisiana

A flag with a light-yellow star in a red canton and thirteen blue, white, and red stripes was adopted by the state on February 11, 1861. Up to the Civil War's conclusion, the original flag was in use.

A stylized fleur-de-lis, another symbol of similar significance frequently portrayed in Louisiana, is formed by the mother pelican's head and her outspread wings covering the three pelican chicks nestling beneath her. The state seal also features this image, which stands for Christian mercy and Catholicism. In Louisiana flags and the state seal during the 19th century, it was customary for the pelican to wear three drips of blood on her chest to symbolize her piety. An eighth grader at Vandebilt Catholic High School in Houma discovered that the custom (on both the state flag and seal) had been adhered to haphazardly in later years and informed his state lawmaker of this. The Louisiana State Legislature approved a bill in April 2006 stating that the pelican used in the state's flag and seal must bear three drips of blood. At a state swearing-in event in November 2010, the new flag was unveiled. According to state officials, the new flag "was mandated by" the 2006 statute, featured a more intricate pelican than the old one, and did away with the word "and" from the ribbon.

Interesting facts about the Louisiana Flag

FAQ About the State of Louisiana!

What is the state of Louisiana known for?

Numerous things make Louisiana famous. A wide variety of delicious meals is available, but our Southern comfort food and seafood are the best. Louisiana is the only place that does crawfish, shrimp, or crab boils! Cajun and Creole food, Mardi Gras festivities, a rich cultural past, bayous, jazz music, and being the birthplace of the American blues are just a few of Louisiana's well-known attractions. The state is also heavily influenced by French colonialism.

How did Louisiana get its name?

When the territory was acquired by France in 1682, Louisiana was given its name in honor of King Louis XIV. The name "Le Grand Siècle" (the Great Century) is frequently used to allude to Louis XIV's rule, which will always conjure up images of an absolute monarchy and a powerful, centralized state. The Sun King, who ascended to the throne at a young age under the guidance of Cardinal Mazarin, personified the ideals of absolutism. He relocated the royal Court to the Palace of Versailles in 1682, which became the primary icon of his authority and influence in Europe.

Because of its state bird, Louisiana is nicknamed the Pelican State.

What are 5 facts about Louisiana?

Explore the Different Types of Louisiana Flag That We Offer!

At Carrot-Top, we are proud to offer Louisiana State Flags for numerous purposes, including indoor display, outdoor display, and even Louisiana Flag Sets!

Indoor Louisiana flags produce traditional and lovely displays in your home, workplace, school, church, or other structure. These flags are made of our proprietary Beacon® nylon and have lock stitching to prevent fraying. They are sturdy and long-lasting. Rich, vibrant colors and finely woven nylon are used to create indoor Louisiana flags, which are completed with a lined pole sleeve on the left side. The remaining sides are trimmed with luxurious classic gold fringe. There are two sizes of these flags: 3' x 5' and 4' x 6'.

Louisiana Flag sets are made to provide you with the freedom and flexibility to select the display that most closely matches your preferences and your environment. Our flag sets come in a variety of flag sizes, flagpole finishes, and flag sizes. With Carrot Top's Louisiana Flag Sets, you may create an original display or a more conventional one to go with your current decor. Our Louisiana flag sets are made to fit the requirements of any room or area. In the majority of locations, our unique 5-9' Majestic Telescopic Pole displays flawlessly. Three different finishes—Gold, Chrome, and Wood-Grained—are available for this adjustable flag poleflagpole, which is simple to move and put together. Both the 3' x 6' and the 4' x 6' Louisiana flags look fantastic when displayed indoors and during parades when used with our Majestic Poles. For a more conventional display, Carrot Top also offers a flagpole finished in Jointed Oak. Our 3' x 5' Louisiana Flag works best with the 8' Jointed Oak finishing pole in areas with at least an 8.5' ceiling clearance. When used with our 4' x 6' Louisiana flag, the 9' Jointed Oak Pole exhibits best in spaces with at least 9.5' of clearance. A lined pole sleeve, a sturdy canvas header, and plush, conventional gold fringe complete both flags. Each Carrot Top flag set comes with a weighted base, an ornate spear or eagle, and a gold string with tassel.

Our Louisiana Flag Flags are Made in the U.S.A

At Carrot-Top Industries, we take great satisfaction in offering products made in the USA, such as our American and Louisiana flags. By purchasing products that are Made in the USA, you may contribute directly to the American economy and independence.

We at Carrot-Top are extremely proud of our more than 40 years of grit and experience. Any of our customer service representatives would be delighted to assist you in placing an order right now for a Louisiana state flag, an American flag, a flagpole, any of our customized merchandise, or even one of our military flags! Get in touch with us right away! Please read our comprehensive state flag buying guide to be positive you are getting the right flag.