Shop our wide selection of N.C. flags for sale. Our indoor and outdoor N.C. flags come in a variety of sizes, from mini to extra-large, in our exclusive Beacon® nylon and Patriarch® polyester fabrics. Click on an image below to learn more about each flag or scroll down to keep reading about our catalog of N.C. flags. 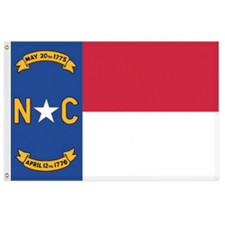 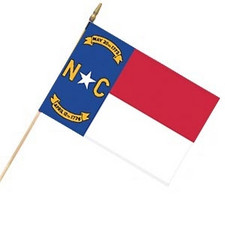 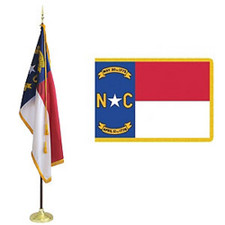 There is an unsupported mention of a Revolutionary War-era North Carolina flag (1775–83). It allegedly had the inscription "May 20, 1775" and was painted white with a hornet's nest, commemorating the day that residents of the town of Mecklenburg allegedly declared their independence from Great Britain.

Before the Civil War (1861–65), North Carolina militia forces flown blue banners bearing the state seal. However, the colors and stripes of the first official North Carolina flag were based on the Stars and Bars, and it featured the date of North Carolina's separation from the Union when it was established on June 22, 1861. (May 20, 1861). Later on, that design served as the foundation for numerous Confederate regimental flags. The current North Carolina flag, which was adopted on March 9, 1885, is similar to the one that was used before the Civil War; it was created by General Johnstone Jones, a Confederate army officer. The words "May 20th, 1775" are inscribed on one of the ribbons of the current flag. The other ribbon reads "April 12th, 1776," referring to the Halifax Resolves, which gave North Carolina delegates permission to vote in favor of the United States' Declaration of Independence.

Before the North Carolinian state constitutional conference of 1861, North Carolina lacked an official state flag. Delegates made a decision to join the Confederacy at this conference. To create a flag, they formed a committee. On June 22, 1861, the conference approved this flag. The flag had a crimson background with a white star in the middle. May 20, 1775, the contentious date of the Mecklenburg Declaration of Independence, was inscribed above the star. The date May 20, 1861, the day North Carolina declared its secession from the Union, was inscribed below the star in a semi-circular shape. Additionally, the flag has two equal-width blue and white bars. The pattern is based on an idea from Raleigh artist William G. Browne.

Johnston Jones, a former Confederate soldier who served as North Carolina's Adjutant General (1877–1888), introduced the legislation that resulted in the state assembly adopting a new flag in March 1885 to replace the one that had been established on June 22, 1861. The original flag's red field was swapped out for a blue one. This was the first and only flag that officially identified North Carolina as a member of the US.

By act of the North Carolina General Assembly, the state flag of North Carolina was approved in 1885. It is described as follows in general Statute 144-1:

“That the flag of North Carolina shall consist of a blue union, containing in the center thereof a white star with the letter ‘N’ in gilt on the left and the letter ‘C’ in gilt on the right of said star, the circle containing the same to be one-third the width of the union. The fly of the flag shall consist of two equally proportioned bars; the upper bar to be red, the lower bar to be white; that the length of the bars horizontally shall be equal to the perpendicular length of the union, and the total length of the flag shall be one-third more than its width. That above the star in the center of the union there shall be a gilt scroll in semi-circular form, containing in black letters this inscription ‘May 20th, 1775,’ and that below the star there shall be a similar scroll containing in black letters the inscription: ‘April 12th, 1776’.”

The symbolism of the North Carolina Flag

It displays the dates of the Halifax Resolves (April 12, 1776) and the Mecklenburg Declaration of Independence, two documents that situate North Carolina in the forefront of the American independence struggle. The Seal of North Carolina also bears both dates.

The constitutional convention of 1861 was the first time that North Carolina had a state flag in place. Delegate from Craven County John D. Whitford proposed a motion to designate a state flag with the inscription "Surgit astrum, May 20, 1775" around a blue field with a white V on it and a star.

The three colors, red, white, and blue, stand in for the hues of the American flag. White stands for purity and innocence, red for tenacity and bravery, and blue for watchfulness, persistence, and justice. The state colors of North Carolina are red and blue.

FAQ About the North Carolina State

Why are there two dates on the North Carolina flag?

The signing of the Mecklenburg Declaration of Independence on May 20, 1775, and the Halifax Resolves on April 12, 1776."

Was North Carolina a Confederate state?

On May 20, 1861, North Carolina formally joined the Confederacy. The second-to-last state to quit the Union was it.

What is the origin of the word Tar Heel?

In the sweltering summer months, workers who produced tar and pitch by burning pine boughs and distilling turpentine from the sticky sap of pine trees frequently went barefoot and surely picked up tar on their heels. A "tar heel" or "rosin heel" was a term used to denote someone who worked in a menial occupation.

Our North Carolina Flags are Always Made in the USA

Here at Carrot-Top, we are proud to carry North Carolina flags that are always Made in the USA. By carrying American-made products, we are working to support American labor and independence from foreign countries.

What North Carolina Flags Do We Offer?

Our Indoor North Carolina flags are produced with the best components and gorgeous, fade-resistant colors. A lined pole sleeve and plush, classic gold fringe are added to these adaptable flags' remaining three sides. Flags for indoor use come in two sizes.

Two of Carrot-unique Top's fabric lines, Patriarch® polyester, and Beacon® nylon are used to create our outdoor North Carolina flags that produce vibrant, eye-catching displays of the NC flag. These flags are made from the best materials, and their detailed, reinforced stitching helps to keep them from fraying and extend their useful lives. Carrot-Top employs vivid, strong hues that don't fade.

You can select the North Carolina flag sets to best suit your needs from our selection. Sets of North Carolina flags blend the majestic majesty of our flags with the opulence and distinction of our statuesque flagpoles. You can select the style and display from Carrot Top to match your preferences and the aesthetic of your room. Choose the best-fitting and-looking flag size, flagpole, and pole finishes.

Pair Your North Carolina Flag with an American Flag Today!

Display your North Carolina State flag with our exclusive Beacon® Nylon American Flags or our exclusive Patriarch® Polyester American Flags! This pairing will be sure to add curb appeal and show your support for both your state and the United States. View our complete list of American flags today.

Let us Assist You!

If you need assistance buying a state flag for your organization, please read our complete guide to help you make the best decision. In addition, please feel free to contact us today for assistance with your order! We have over forty years in the flag and flagpole business. Our customer care representatives are eager to assist you and ensure that you are getting a great product every time!