The Tennessee State flag nobly represents the people and lands of the “Volunteer State”. The Tennessee flag consists of three stars representing the “grand divisions” of the state: The Grand Smoky Mountains in East, the highlands in the Middle, and lowlands along the Mississippi River in the West. The white circle surrounding the stars represents the unity of the three groups bound together. The solid blue bar serves mostly as a decorative element. The flag was designed by LeRoy Reeves of the Third Regiment of the Tennessee Infantry and adopted in 1905.

Our high-quality Tennessee flags are always proudly Made in America. Our exclusive nylon and polyester flag brand are the best all-around flag on the market. Learn more below about Tennessee and its state flag below the products! Don’t wait! Order today! 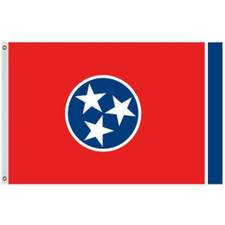 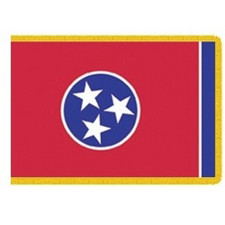 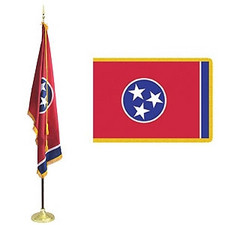 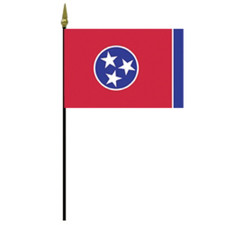 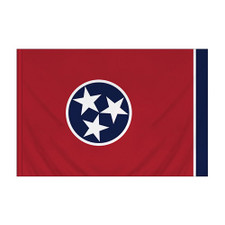 Background of the Tennessee Flag

The "Volunteer State's" citizens and lands are honorably represented by the state flag of Tennessee. The Major Smoky Mountains in the east, the highlands in the middle, and the lowlands along the Mississippi River in the west make up the three stars on the Tennessee flag, which stand for the state's "grand divisions." The unity of the three groups that are joined together is symbolized by the white circle that surrounds the stars. The solid blue bar is primarily used as decoration. LeRoy Reeves of the Third Tennessee Infantry Regiment created the flag, which was accepted in 1905.

The stars stand for Tennessee's three "Grand Divisions," which are physically and legally distinct (i.e., East Tennessee, Middle Tennessee, and West Tennessee). The unity of those vast divides is symbolized by the blue circle surrounding the stars. The blue strip along the edge of the flag was purely aesthetic. Colonel Reeves explained the purpose of the blue bar when asked about it: "The final blue bar relieves the sameness of the crimson field and prevents the flag from showing too much crimson when hanging limp." In October 1917, National Geographic incorrectly claimed the stars represented the state as the third to join the Union after the original thirteen.

The similarities between the Tennessee State Flag and the Third National Flag of the Confederacy are also noted by vexillologist Steven A. Knowlton, who asserts that "the Tennessee flag has pragmatic unity with the Confederate flag: both share the element of white stars inside a fimbriated blue charge, and the element of that blue charge on a red field." Knowlton agreed that there isn't any concrete proof that the flag was created to resemble the Confederate flag, though.

The center insignia must be flown on the flag in a specific manner that is prescribed by state legislation.

The three (3) stars must be arranged so that no two of their centers fall in a line parallel to the flag's side or end, but rather in the middle of the two. The highest star must be the one closest to the flag's upper-confined corner.

1976 saw the U.S. A sheet of 13 cent stamps featuring images of American state flags was released by the Postal Service. The Tennessee's illustration was turned around.

Interesting Facts About the Tennessee Flag

-The center insignia must be flown on the flag in a specific manner that is prescribed by state legislation.

-The three (3) stars must be arranged so that no two of their centers fall in a line parallel to the flag's side or end, but rather in the middle of the two. The highest star must be the one closest to the flag's upper-confined corner.

-1976 saw the U.S. A sheet of 13 cent stamps featuring images of American state flags was released by the Postal Service. The Tennessee's illustration was turned around.

What Tennessee Flags Do We Offer?

Here at Carrot-Top Industries, we are proud to offer Tennessee flags for indoor use, outdoor use and even flag sets so you can be sure you are getting the perfect flag for your needs!

Indoor Tennessee Flags are crafted with our exclusive Beacon® nylon and are available in two sizes. These flags create classic indoor displays and parade flags. Based on the height of your flagpole, choose the size of your flag.

With our outdoor Tennessee flags, you can proudly display your support for the Volunteer State. These lovely flags produce breathtaking outdoor displays. Our outdoor flags are made from two fabrics and come in a variety of sizes, making it simple to adjust the flag's size to the height of your flagpole.

Beautifully made flags and imposing, distinguishing flag poles are included in Tennessee Flag Sets. These flag sets produced vibrant and reverent displays of the Tennessee state flag in your residence, place of business, place of worship, school, or other structure. From a range of two flags, two flagpoles, and three pole finishes, pick the style that appeals to you.

Our Tennessee Flags are Made in the USA!

At Carrot-Top Industries, we take great pride in offering Made in the USA goods like our American and Tennessee flags. You can directly support the American economy and independence by buying products that are Made in the USA.

FAQ About the State of Tennessee

Why is Tennessee a state?

On June 1, 1796, Tennessee officially became a state, capping a protracted process. It was not a novel concept to establish a state from the region west of the Appalachian Mountains. The territory was only accessible to Native Americans during the British era. No other people were permitted to settle here. The American Revolution ended with the British losing, so what happened? All of the territory between the mountains and the Mississippi River was claimed by the state of North Carolina. Nearly immediately, people started to swarm in. Many people violated treaties by settling on Native American territory. Years of conflict followed as a result of this.

What is the most visited place in Tennessee?

Dollywood, which is named after the country music star Dolly Parton, has long been Tennessee's most well-liked ticketed attraction, drawing more than three million guests annually.

What is the most popular food in Tennessee?

The most well-known dish from Tennessee is probably country ham. The salt-cured hams rival Virginia's Smithfield hams and can be eaten boiled, grilled, or fried.

What is Tennessee famous for?

Tennessee is renowned for its vibrant music scene, fine whiskey, and Great Smoky Mountains. Tennessee is the home of numerous well-known musicians, including Dolly Parton and Elvis Presley, who are both country music performers and vocalists.

At Carrot-Top, we take great pride in having more than 40 years of grit and expertise behind us. Any of our customer service agents would be happy to help you place an order for a Tennessee state flag, an American flag, a flagpole, any of our customized goods, or even one of our military flags right now! Contact us right away! Please feel free to browse our in-depth flag buying guide as well.