The Northern Mariana Islands flag connects the history, traditions and peoples of the island with its present and future.   The flag features a latte stone, wreath and a white star set on light blue background. The white, five- pointed mirrors those on the US flag and denotes the island’s connection to the United States.  Behind the star is a Latte Stone, a traditional stone upon which early inhabitants, the Chamarros, built their homes.   The wreath (pronounced mwarmwar) on the flag is comprised of colorful local flowers and has come to symbolize the relation between the groups of island and its history.  The mwarmwar reflects the influence the Carolinians who immigrated to the island. The blue shade of the flag represents the ocean of the Marianas trenches.   The flag was originally designed in 1985 by Taga. 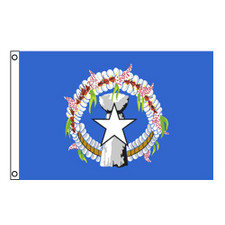