A state in the upper Midwestern region of the country is Wisconsin. Wisconsin is the 20th-most populous state and the 25th-largest state in terms of total area. With Minnesota to the west, Iowa to the southwest, Illinois to the south, Lake Michigan to the east, Michigan to the northeast, and Lake Superior to the north, it is surrounded by these states. The majority of people in Wisconsin reside in communities that are close to Lake Michigan. The “Badger State’s” flag has origins dating back to 1863 and was modified in 1979. Carrot-Top offers over forty years of expertise in the flag and flagpole business. Let us assist you today when looking for a Wisconsin flag. 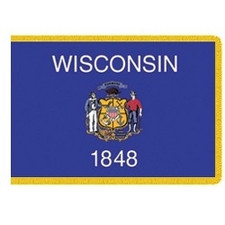 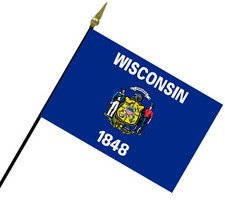 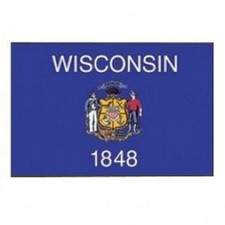 Background of the Wisconsin Flag

Following requests for usage on the battlefield from Civil War battalions, Wisconsin's flag was accepted in 1863. The state coat of arms was placed in the center of a field of dark blue, according to the specifications chosen by a committee set up by the legislature. This style resembled those used by regiments. The design of the state flag was officially incorporated to the Wisconsin Statutes in 1913.

At the request of Wisconsin Governor Julius P. Heil, Carl R. Eklund said that he raised the state flag over Antarctica in 1941, about 620 miles into an uncharted region and about 500 miles north of the South Pole. Eklund flew another flag over Antarctica in 1958 and then gave it to the state museum for display. State assemblyman William N. Belter of Wautoma attacked the flag in 1953, saying the intricate embellishments made it excessively expensive.

It was criticized as being overly busy in 1973 when the state senate attempted to add the name Wisconsin to the flag. State seals, rather than the state coat of arms, were improperly shown on several state flags that were being sold in 1975. The correct state flag does not contain the banner of thirteen stars at the bottom, according to Wisconsin Secretary of State Douglas J. La Follette.

Wisconsin's flag was altered in 1979 to include "Wisconsin" and "1848," the year Wisconsin was admitted to the Union, to set it apart from the many other blue U.S. state flags. After May 1, 1981, this pattern had to be used on all Wisconsin state flags produced.

Interesting Facts About the Wisconsin Flag

FAQ About the State of Wisconsin

1. What is the Wisconsin state nickname?

2. What is Wisconsin known for?

The state is recognized as "America's Dairyland" and is one of the top dairy producers in the country. It is especially well-known for its cheese. Additionally, the state is well known for its beer, especially historically in Milwaukee, which is best known as the home of the Miller Brewing Company.

3. Who is from Wisconsin?

4. How big is Wisconsin?

Our Wisconsin Flags are Made in the USA!

We are very proud to provide American and Wisconsin state flags that are Made in the USA. By purchasing goods created in the United States, where labor laws guarantee safe working conditions, you can directly promote American independence and assure safer and more equitable working circumstances.

What Wisconsin Flags do we Offer?

Here at Carrot-Top, we take pride in being able to offer Wisconsin flags to display indoors, outdoors, in a flag set, and any place you can take a mini state flag!

Indoor Wisconsin flags come in two sizes and are made of special Carrot-Top materials. At any location, these flags form timeless indoor displays. With these lovely flags that feature deep, bright colors and strong lock stitching, Wisconsin may be celebrated in style.

Outdoor Wisconsin flags come in a range of sizes and are made from two unique Carrot Top fabrics. These flags produce vibrant displays that proudly convey your love for Wisconsin to everyone. Outdoor flags are well crafted with vivid colors. These flags are extremely durable.

You can choose how to celebrate the state of Wisconsin in your area using our Wisconsin Flag sets. These flag sets come in a variety of designs so you can either accent your current décor or create an altogether new appearance for your display. Two flags, two flagpoles, and three pole finishes are available. Honor Wisconsin in a way that reflects your personal or professional preferences.

Mini Wisconsin flags are a cool and entertaining way to support and express your admiration for the wonderful state of Wisconsin. These flags have strengthened fly end stitching and rich, striking blue and white hues. For parades, protests, sporting events, and more, mini flags are the ideal memento. There are three sizes of these hand-held flags.

Our company, Carrot-Top, is quite proud of its more than 40 years of selling flags. Any of our Customer Care Representatives will be happy to help you place an order for a Wisconsin state flag, an American flag, a flagpole, any of our custom goods, or even one of our military flags if you get in touch with us right away. To make sure you acquire the correct size flag for your display, please read our in-depth flag buying guide as well.