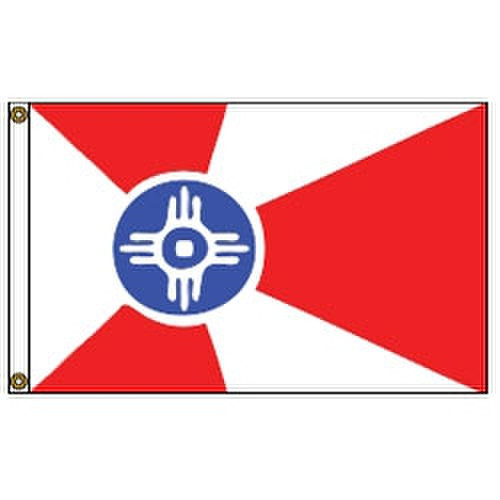 The Wichita City flag embraces the city's rich Native American heritage. The Wichita flag, designed by Cecil McAlister in 1937, symbolizes the Indian word “Wichita" which means scattered lodges. The flag features a white circle around a blue disc and three alternating rays of white and red. The white circle represents home, the blue sun signifies happiness and contentment, while red denotes honor and white, courage. The red and white rays symbolize the paths to freedom. Stitched on the blue sun is the Indian symbol Hogan or permanent home. United, the colors and symbols of the Wichita flag convey that the people of Wichita are free to come and go. For more information about Wichita City flags see the description tab below.

Wichita is the largest city in Kansas. Located at the union of the Arkansas and the Little Arkansas Rivers, Wichita is the cultural center and industrial hub of the state. Wichita began as a trading post on the Chisholm Trail in 1860 and quickly became a key destination for cattle drivers traveling north from Texas to reach the railroads. During the 1920s Wichita transformed into a hub for U.S. aircraft production and became known as “The Air Capital of the World." Our Wichita flags are the best city flags available. Sewn with impeccable stitching, these long lasting, durable flag display vivid colors and wave effortlessly in the wind. Wichita City flags are available in five sizes ranging from 2'x3' to 6'x10'. All Carrot Top flags feature a canvas header and two solid brass grommets for easy attachment to your flag pole. Pair your Wichita City flag with Kansas State flag and an American flag for a complete set.