The Alaska state flag symbolizes the diversity, location, natural beauty and strength of “The Land of the Midnight Sun.” Designed in 1927 by John Bell Benson, a 13-year old orphan from Seward, the blue field represents the sky, sea, mountain lakes and wildflowers of Alaska. Blue also captures the color of the forget-me-not, an Alaskan flower. Seven of eight emblazoned gold stars form the Big Dipper, a constellation often referred to as the Great Bear--an animal indigenous to Alaska and a symbol of the state’s strength. The eighth star, being the North Star, represents the Northern most state. 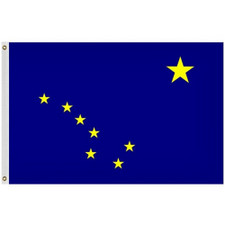 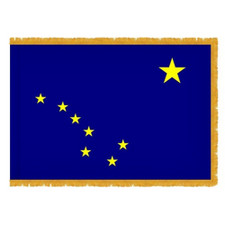 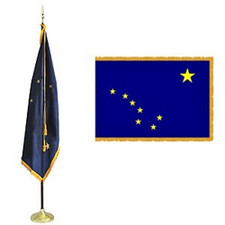 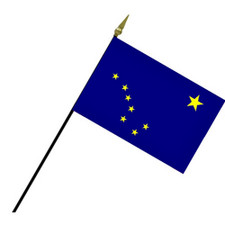 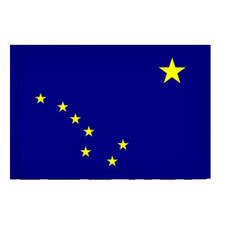 On March 30, 1867, the United States reached an agreement to purchase Alaska from Russia for a price of $7.2 million. The Treaty with Russia was negotiated and signed by Secretary of State William Seward and Russian Minister to the United States Edouard de Stoeckl.

Alaska, the 49th state admitted to the union in 1959, is the largest state (by area) in the United States. It is located in the far northwest of the continent of North America. Alaska had previously been regarded as a colony.

Alaska was managed by the Russian American Company (RAC), a state-sponsored business organization with its first headquarters in Irkutsk and later St. Petersburg, Russia, between 1799 and 1867. The Company's ships and shoreside facilities flew the official flag of Russia (civil ensign). The design of a new flag for the Russian American Corporation was submitted to Aleksandr I, Emperor of Russia on September 28 (October 10, new style), 1806, who made the notation "So be it" and appended his cypher, approving the usage of the first flag in Russian history by an Imperial licensed company. The ukase was heard in the Senate following Imperial confirmation, and on October 19, 1806, it was submitted to the RAC's main office as well as the Admiralty and Commerce colleges for execution.

The Imperial eagle was positioned in the upper left corner of Russia's commercial flag in the new Company flag design of 1806. The white stripe's width was increased to roughly cover one-half of the flag's breadth in order to keep the State insignia clear and more apparent. The commercial flag of Russia typically had width proportions of equal thirds. For greater visibility, the Imperial eagle held a scroll that dipped into the blue stripe and said, in shortened form, "Russian American Company's." The official name of the Company, "Under His Imperial Majesty's Protection Russian-American Company," is enhanced by the symbolism of the scroll beneath the Imperial eagle. Up until October 18, 1867, when the Russian and American Company ceded all of its properties in Alaska to the United States, the flag was flown over Alaska.

On May 2, 1927, the Alaska Legislature designated Benson's artwork as the official flag for the Territory of Alaska. The first flag created using Benny's blueprint was composed of blue silk with gold stars sewn on. At Statehood in 1959, it remained the official flag.

The state anthem "Alaska's Flag" explains the symbolism of the flag.

The Alaska Department of the American Legion held a territorial competition for Alaskan students in the seventh grade (age 12–13) to twelfth grade (age 17–18) to create a flag for the territory, 32 years before Alaska became a state. The contest committee selected fourteen-year-old orphan Benny Benson's design in 1927 to serve as the inspiration for the Territory of Alaska's future flag. Alaskan native Benson resided in Seward's Jesse Lee Home for Children. Since the region's purchase from Russia in 1867, Alaskans had flown solely the American flag. Over nearly 700 other schoolchildren's proposals from all over the region, Benson's design was chosen. The majority of the other submissions included polar bears, the midnight sun, the northern lights, the territorial seal, and/or gold pans. Benson received a $1,000 cash prize and an engraved watch in recognition of his accomplishment.

In search of the symbols he used in his design, Benny looked to the sky. He selected the familiar constellation he searched for every night at the orphanage before bed and wrote this description of it:

Interesting Facts about the Alaskan Flag

Here are five things about the Alaskan flag that you might not be aware of:

First, it shows the Big Dipper.

The Alaskan flag could appear to the untrained eye to be merely a haphazard arrangement of stars. Eight golden stars are shown on a blue background. But this is not just any random pattern. Actually, it's the Big Dipper. In Ursa Major, there is a constellation called the Big Dipper, which resembles a cup and handle. Alaska's flag features a picture of this cancellation.

Second, it is used as Navigational Aids

Third, it was developed through a Contest

Alaska's flag was created as part of a competition. The Alaska Department of the American Legion launched a competition to find flag designs in 1927. Around 700 submissions were submitted for the contest, which was conducted at various middle and high schools across the state. Benny Benson, a 13-year-old pupil, was chosen as the winner. The Big Dipper constellation and the North Star were depicted in Benson's artwork on a blue background.

Last but not least, it is considered one of the best designs.

Despite being rather straightforward, the Alaskan flag is one of the best-designed flags. According to a survey by the North American Vexillological Association, the Alaska flag has the fifth-best design out of all American and Canadian flags.

1. Why is the Alaska flag called the Big Dipper?

The Big Dipper, a bear emblem that is both native to Alaska and a symbol of the state's strength, is represented by the flag's stars, which are made to resemble it.

2. What are some things that Alaska is famous for?

Glaciers: An ice sculpture you see one day can be very different from the next since glaciers are continually moving and can advance by several feet per day. Some glaciers in Alaska are retreating, so if you visit the same glacier again in a few months, you might see changes from when you first visited.

The wildlife and wilderness: Alaska is known for its abundant wildlife, including salmon, moose, caribou, bears, whales, bison, puffins, and jellyfish. In terms of landscape, Alaska is renowned for its glaciers, fjords, mountains, and countless lakes, rivers, and canals.

National Parks: Over half of the US's national parklands are located in Alaska. Eight national parks are located here, which is the second-highest number in the US by states. You will feel as though you have endless possibilities.

The Iditarod Dog Sled Race: An annual long-distance sled dog race that takes place in early March is called the Iditarod Trail Sled Dog Race, or simply The Iditarod. The Iditarod was first held in 1973 as a competition to test the greatest sled dog mushers and teams before becoming the fiercely competitive race it is today. It crosses the entire state of Alaska, from Anchorage to Nome.

3. How many people live in Alaska?

The population of Alaska, according to more recent estimates, is 736,990 (as of 2020), although this number is not official.

Which Alaska Flags We Offer

We offer flags of Alaska that are great for indoor use, outdoor use, and even Alaska Flag Sets!

The most adaptable indoor flags on the market are our indoor Alaska flags. These flags are composed of beautifully vibrant colors and skillfully woven nylon. A lined pole sleeve along the left side and velvety, typical gold fringe around the other two sides are the finishing touches for indoor flags. Indoor Alaska flags are available from Carrot Top in two sizes. Use our special Majestic Telescopic flagpole or an 8' indoor/parade flagpole with our 3' by 5' Alaska flag. The 4' x 6' Alaska flag looks best when flown from one of our Majestic Telescopic flagpoles and works great on a 9' indoor/parade flagpole.

In order to suit your preferences and create the best look and style for your area, our Alaska Flag Sets give you a wide range of flag sizes and flagpole options. There are two sizes of Alaska flag sets available, and Carrot Top offers a larger variety of our Majestic and Traditional flag poles. With this flag set, you may pick the ideal flag for displays indoors and at parades.

Our Alaska Flags are Made in the USA

We take great pride in offering Made in the USA American and Alaskan state flags. You can directly support American independence and ensure safer and more equitable working conditions by purchasing products made in the United States.

We at Carrot-Top are very proud of our over 40 years of experience. If you contact us right away, any of our Customer Care Representatives will be delighted to assist you in placing an order for an Alaska state flag, an American flag, a flagpole, any of our personalized goods, or even one of our military flags. Please read our comprehensive flag buying guide as well.